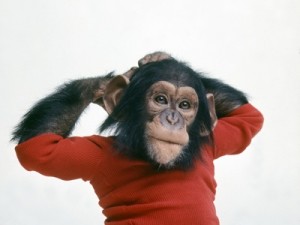 Every few years, a documentary comes along that just really makes me stop everything I am doing and really think about the impact we have as humans on everything on this planet.  And Project Nim does just that.  It is not a new story…the teaching of sign language to chimpanzees to try to better communicate with them is one we have heard before.  But what we have not heard or seen is the impact on the chimp itself.

Director James Marsh and Producer Simon Chinn took two years to put together a wonderful but bittersweet look into the life of Nim, a chimpanzee taken from his mother at birth, and for the first five years of his life he is kept from his species.  He is raised in the exact same way as a human child is, and taught American Sign Language as a means to communicate to those humans around him.    The story gives us such an insight more on ourselves rather than the chimp.  I don’t think we realize the damage that we can do to other species, all in the name of science.   This animal was wrenched from its mother and kept from being its true self, all to try to communicate with this chimp.  Maybe teaching them signing could be better if they were taught it so they can use it within their own species and we can observe and learn that way? 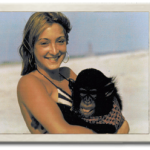 This film was meticulously edited and truly was wonderful to watch in its details and editing.  You feel so much for Nim and want everything to have a movie happy ending, but alas…as we know that is not always the case.  My only hope is that many more people get a chance to see the film and speak out against animal experimentation and we can find better ways to communicate with our fellow mammals.