Yes, you heard that right.  The action film, Push,  that only domestically grossed $32 million is being made into a television series.  Summit it seems is looking to push its success into the arena of home entertainment as well. Push represents one of the viable properties they have for television, since their biggest success, Twilight, is not available for this option. The series will be a continuation of the film from last year. Maybe it will tie up some loose ends. 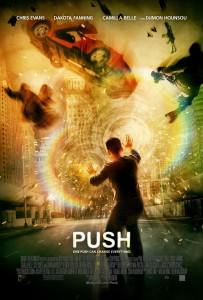 Summit Entertainment, a worldwide theatrical motion picture development, financing, production and distribution studio, and leading independent studio E1 Entertainment announced today that they plan to jointly develop and produce a television series based on Summit’s 2009 feature film Push. The project marks a natural evolution for Summit of not only producing feature films but also developing and producing material for the global television marketplace. The television series will be an extension of the film, a science fiction thriller, centered on people with paranormal powers who band together to take down a corrupt government agency. The Push television series furthers the relationship established in 2007 between Summit and E1, with E1 licensing exclusive distribution rights to Summit produced feature films in the UK and Canada.

Screenwriter David Hayter, who penned the blockbuster films Watchmen, The Scorpion King, X2 and X-Men, will script the series pilot. E1 and Dark Hero Studios, co-owned by Hayter and producing partner Benedict Carver, will jointly produce the series based on the screenplay created by David Bourla for Summit Entertainment. Hayter and Carver will be executive producers, along with E1’s Noreen Halpern and John Morayniss. Summit, E1 and Dark Hero are currently in discussion with US broadcasters about the series. Hayter and Dark Hero Studios are repped by UTA.

“The concept behind the Push feature film offers a broad and rich canvas on which to extend the storyline and characters introduced in the feature film,” said Summit Co-Chairmen Rob Friedman and Patrick Wachsberger. “The project is also the perfect vehicle to initiate Summit’s plans of producing programming for the global television marketplace. The opportunity to do this with our trusted partners at E1 re-enforces that this is the right opportunity to grow Summit’s platform.”

Patrice Theroux, E1’s President of Filmed Entertainment says, “It’s a pleasure to witness the next step forward of our theatrical relationship with Summit take place with the television series Push. The strengths that exist between E1, Summit and Dark Hero are going to result in a phenomenal TV series, which will resonate on a worldwide basis.”

John Morayniss, CEO of E1 Television, added “This is one of those ‘perfect fit’ moments: David Hayter’s work on Watchmen gives him super-hero status on the sci-fi front, and instantly ensures that Push gets the right kind of attention.”

“I’m looking forward to translating the fantastic concept behind Push to the small screen,” said Hayter. “I’m also thrilled for Dark Hero to be in business with two independent powerhouses like Summit and E1.”

Summit and E1 will jointly arrange for the U.S. television license to the Push series. E1 is set to handle the TV sales in Canada as well as home entertainment and broadcasting rights in Canada, UK, and The Benelux. Summit will distribute home entertainment in the U.S. Both Summit and E1 will split foreign sales by each handling separate territories as part of their stated multi-territory content distribution strategy.