It’s not easy being a Blues fan.

Being in St. Louis, the team will always play a second fiddle to the town’s one true love, the Cardinals. The last decade hasn’t really been the most inspiring, either, as the Blues managed to go from a perennial playoff team (25 consecutive berths from 1980 to 2004, including the best record in the NHL in 2000) to a perennial doormat.

I grew up in the era of Hull and Oates, with Curtis “The Cat” Joseph in goal. I was overjoyed when the Blues traded for Wayne Gretzky, and I was pissed when Mike Keenan ran him out of town.

I was angry when the Blues traded Shanahan for Pronger, then ecstatic when Pronger turned into one of the best defensemen in the league.

I was pretty awed one day when Al MacInnis walked into the Total Hockey I used to work at and I got to sharpen his skates. Al was one of the best offensive defensemen in the history of the game, with his monster slapshot that he somehow did using a wood Sherwood stick while everyone else used the new composites.

Mostly, though, I’ve been left hanging on the promise of a Stanley Cup. The Blues finished the 1999-2000 season with the best regular-season record in the league, only to be knocked out by the Sharks in the first round.

Then, the Blues made it to the conference finals the next year, only to be knocked out by Colorado 4-1.

I hate the Sharks.

I hate the Red Wings, but it’s more of a respectful hate. They play the game hard, but they win. Although they didn’t win this year. Bazinga.

I hate the Predators, again with a hint of respect. They’re a blue-collar team with one of the best goaltenders in the league.

I just flat out hate the Blackhawks.

Well, really, I bleed crimson. If you do bleed blue, you’re either incredibly sick or not quite fully human. 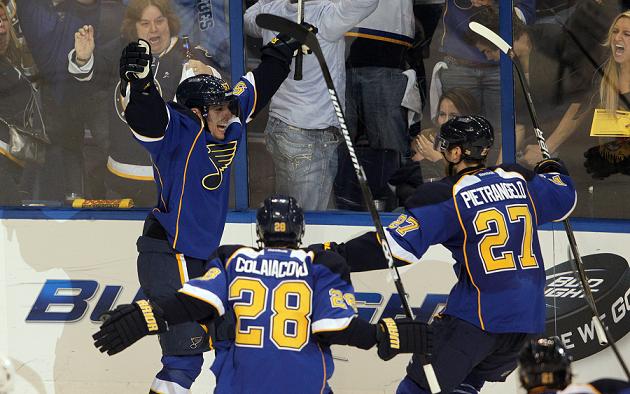 When this season started, I was cautiously optimistic. How many times in recent years have we Blues fans said, “Yeah, but wait til next year. When our young guys start to develop, look out”? I thought this might be another one of those years, especially after the team started out 6-7. The hammer was brought down on Davis Payne, and they brought in Ken Hitchcock, who’s done nothing but turn this team into one of the best in the league.

Actually, I take that back. The team had the talent all along; they’re simply buying into it now under his tutelage. He brought the team within three points of finishing with the best record in the NHL.

He took a struggling Jaroslav Halak, gave him some room to breathe while Brian Elliott went into beast mode in goal, then brought back Halak with a sense of confidence. This tandem allowed the fewest goals in an 82-game season.

He introduced shorter, more intense shifts. This showed at times during the season, when late in the game, the Blues seemed to play with a bit more intensity than the other teams.

He implemented a smothering defensive system that preached pressure throughout the neutral zone. The team ranked first in fewest shots on goal allowed, which made the jobs of Elliott and Halak infinitely easier.

And now this team has made it past the first round with an easy 4-1 series win over the Sharks. They’ll face a tougher opponent in the LA Kings, who ousted Vancouver (who finished the regular season with the best record) in five games. Both sides feature excellent goaltending, with Halak and Elliott for the Blues and Jonathan Quick for the Kings. The Kings have an excellent defense as well and took three of four games from the Blues in the regular season.

I don’t see this series turning out that way, though. I don’t think they see it coming.

They didn’t see Andy MacDonald at all during the regular season. They didn’t see David Perron or Alex Steen for two of those games. In terms of goals-per-game, those are our top three scorers right there. Once Andy Mac got back on the ice, he rolled with 10 goals and 22 points in 25 games. He was unstoppable in the series against the Sharks, racking up four goals and four assists.

Right behind him is Patrik Berglund, who tallied three goals and four assists in the series. He broke out last summer in the World Championships, but for some reason it didn’t carry over to the regular season.

Manning the blue line is Alex Pietrangelo, who could be the best young defenseman in the game today. Expected to quarterback the defense for years to come with Erik Johnson, he stepped up when Johnson was traded away and his slow promotion to the big leagues was well-deserved.

And then, of course, there’s the Roman Polak door.

From a realistic standpoint, this season has to be considered an astonishing success; anything from this point on is just gravy. Delicious gravy.

From a pragmatic standpoint, there’s a long way to go, and the road doesn’t get any easier. These teams didn’t get here just by accident.

Forget all that crap, though. The playoffs are meant for us to dream about.

Remember last fall, when the Cardinals made their improbable run? The love the other teams showed. That’s one thing I love about St. Louis. When one team does well, the whole city does well. The Rams and Blues didn’t get jealous and ignored them; they embraced them with open arms.

Well, now it’s the Blues’ turn to revel, and it’s time for others to show their support. James Laurinaitis posted a message on youtube on behalf of the Rams, and the Cardinals have a giant banner hanging from Busch. It’s been 42 years since the team’s even been in the Stanley Cup finals. Still, the “experts” don’t think it can be done. Just look at their expert picks. Six professional hockey writers, picking their favorites. Six picked the Penguins (oops!) to win the East and the Stanley Cup. Five picked either Vancouver (my bad) or San Jose (oof) to win the West.

Go ahead. Doubt. Turn the Blues’ backs to the walls. See what happens.

If you do that, though, just please…open the Roman Polak door.

This is what we’ve been waiting for.