In a move that shouldn’t really have surprised any Mizzou fans,quarterback Blaine Gabbert declared himself eligible for the 2011 draft. 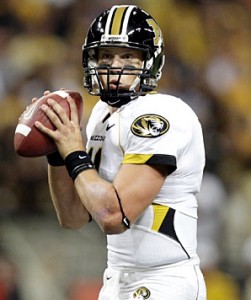 Gabbert’s junior season was better in some categories than 2009, but worse in others. He improved his completion percentage by 4.5 points, from 58.9 to 63.4% and he also ran for more yards and touchdowns. On the other hand, he threw for less yards, had a lower yard-per-completion average, threw for fewer touchdowns, and threw nine picks, including two pivotal interceptions in the Insight Bowl that essentially cost the Tigers the game.

In his defense, one of the picks wasn’t his fault. At the end of the first half, he threw an endzone pass that Jerrell Jackson and possibly one of the Iowa defenders tipped into the air that was then caught in the endzone for a touchback. The second pick, however, was all him. Marching down the field with a 24-20 lead, Gabbert lofted a pass to Wes Kemp with a corner right in front of him. The pass was promptly returned for a touchdown that provided the margin of victory.

Other than those passes, however, Gabbert had a career night that most likely tipped the scales in his decision to go pro. He went 41 for 57 for 434 yards and a TD against one of the top-ranked secondaries in the nation. Had he not had such a terrific game, he’d probably have stayed at Mizzou another year. As it is, he’s projected to be a first-round pick, so it makes sense for him to go.

So what does this mean for Mizzou? Well, the press will remove them from consideration as a pre-season top 10, most likely. The front-runner to replace Gabbert is probably James Franklin, the only other quarterback to see action this year. In limited action, Franklin completed 11 of 14 passes  for 106 yards, 1 TD and 1 INT. He also ran 23 times for 116 yards and two scores, evoking memories of Brad Smith. Beyond him are Jimmy Costello (currently a junior) and Ashton Glaser and Tyler Gabbert [Blaine’s little broseph], both currently freshmen. On top of that, Mizzou will be getting a highly regarded recruit in Corbin Berkstresser. Missouri might struggle to replace Gabbert, but it won’t be impossible. They return most of their running back stable, and their receiving corps has a decent amount of experience.

Apparently leading a super-conservative offense will get you interviews as a head coach. Looks like Cleveland might be willing to fulfill Rams fans’ dreams by taking offensive coordinator Pat Shurmur off our hands.

The move actually makes sense for a few reasons. Mike Holmgren is running thngs over in Cleveland and he heavily favors the West Coast offense, which is what Shurmur runs. On top of that, Pat’s uncle, Fritz, worked for Holmgren on his defensive staff as coordinator. 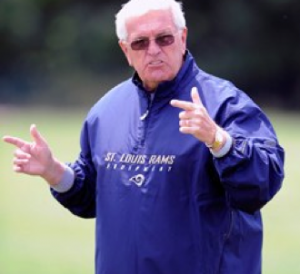 Whenever you hear "dick curl," I bet this is the first image you think of.

The question is, who would replace him if he did leave? Spagnuolo likes to run a conservative team, which flies in the face of logic given he has a superstar in the making at quarterback. One possibility could be the current quarterbacks coach, Dick Curl, who has one of the most ridiculous names in coaching history. But he’s been responsible for the growth of Bradford so far, so the Rams wouldn’t lose a huge amount of continuity.

That’s about all I got for now. Until next time.