When I think of George Lucas, I tend to think of one film franchise. 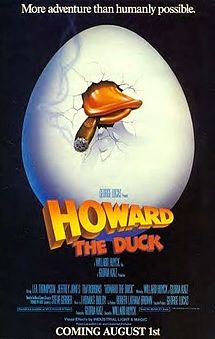 Jokes aside, George Lucas is one of the biggest names in cinema history, having brought us two extraordinarily popular film franchises, first Star Wars, followed by Indiana Jones. Recently, however, his reputation has taken a tremendous beating following the disappointing Star Wars prequels as well as the fourth Indiana Jones film.

Lucas has gone so far as to announce that after the release of Red Tails, with the possible exception of a fifth Indiana Jones film, he would be going into a state of semi-retirement. Being a huge fan of the aforementioned film franchises, I was moderately disappointed, as I’d still rather watch the first three films of the Star Wars saga than many films coming out today. 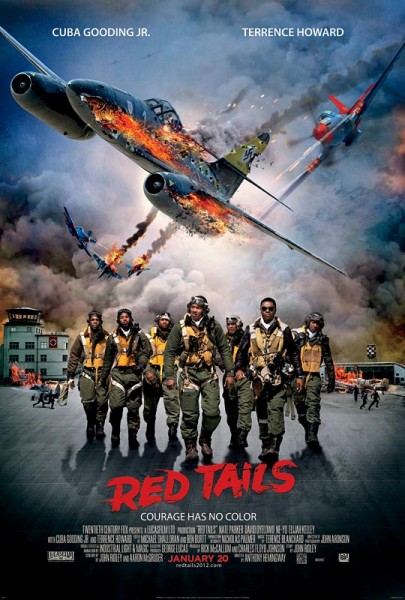 When I found out he’d been working on a film about the Tuskegee Airmen, I was pretty excited. I’m far from an expert on World War II, but it’s one of my favorite subjects to study (history was one of my majors). The story of the Tuskegee Airmen is overshadowed by hundreds of other books, films, and television series that have given other troops their due.

The film starts off following a bombing raid during the climax of World War II. As the Allied bombers approach their targets, their fighter escorts are lured away from the group by German scouts. While the fighters are distracted, another group of Nazi planes swoop in and decimate the fleet. Meanwhile, a flight group of four airmen in the 332nd Fighter Group are on a patrol flight when they come across a train carrying munitions. While three of the flight attack the train from behind, one pilot, Lt. Joe Little, callsign Lightning (David Oyelowo), breaks formation and attacks head on, destroying the train and preventing it from escaping into a tunnel.

When the flight lands, Lightning, generally regarded as the best pilot in the squadron, is celebrated by the rest of the squadron but privately chastised by his flight commander, Captain Martin “Easy” Julian (Nate Parker) for disobeying orders; meanwhile, Little voices his concern for Julian’s constant drinking.

Back in the United States, Col. Bullard (Terrence Howard) pleads with his commanding officer to give the group a chance to see actual combat rather than striking irrelevant ground targets and mundane patrols. It’s clear his commanding officers are hesitant to oblige him, given the color of his skin and the men under his command, but finally the men are given the job of bomber escort. Bullard and his XO, Major Stance (Cuba Gooding, Jr.) order the men to stay with the bombers and protect them at all cost, rather than go after the fighters and try for glory. Following his orders, the men succeed beyond expectations, bringing back all the bombers without suffering a single casualty. Encouraged by this first mission, the men are given additional escort duty, which they carry out better than any other squadrons. Meanwhile, Little begins a romantic relationship with a local woman, Sofia (Daniela Ruah), whom he’d spotted while flying earlier.

Emboldened by their success, cracks in the integrity of the squadron begin to appear. Lightning takes more chances during combat, while Easy begins to drink before he flies. The group finally gets to fly the newest plane in the American arsenal, the P51 Mustang, and to differentiate themselves, they paint the tails red to mimick the Red Baron, arguably the most famous fighter pilot in history. Eventually, however, the losses begin to accrue and the men are forced to look at themselves, not only as a unit, but as individuals.

As a disclaimer, I was not around to witness the blatant racism prevalent in the first half of the 20th century. I cannot attest as to how accurate some of the incidents of racism portrayed were; based on books I’ve read and interviews I’ve heard, however, it would not surprise me if the situation were as portrayed in the film. The Tuskegee men were essentially considered second-class pilots, given hand-me-down old fighters and forced to fly the most mundane of assignments. They gradually earned the respect of fellow pilots, and by the end of the war, they’d accumulated some considerably successful numbers. The group destroyed 261 enemy aircraft and damaged an additional 148 while suffering 66 casualties.

The film succeeds astonishingly well in its biggest draw: the action. The dogfights are intense and captivating. More than once I found myself edging to the tip of my seat while watching the fighters weave in and out of flak clouds while evading and pursuing. From a George Lucas-produced film, I have to say that anything less would have been a considerable disappointment.

It’s unfortunate, then, that the rest of the film was…quite frankly, a bit of a letdown. The characters were typecast out of a number of action movies. Lightning is a typical alpha male; he does things the way he wants to, even when his superior and good friend orders him not to. Easy is a respected leader with a tragic flaw that has the potential to be his undoing.

I wanted this film to be an homage to the men who served in the Tuskegee airgroup, but it just felt like an ordinary us-against-the-world story. The film shows several of the factors working against the men, but it didn’t seem genuine. As a result, the storyline falls into an all-too-familiar pattern halfway through, and I found myself predicting the actions and reactions of the characters scenes before they occurred.

The production quality, on the other hand, is top-notch. The visuals and sound are sublime. When the camera pans over the airgroup and the bombers they’re escorting, it’s awe-inspiring to see such a massive coordinated fleet of planes flying in formation.

One thing I caught myself critiquing was the color and picture. It’s not terrible; on the contrary, it’s pretty vivid, and I found myself wishing for the opposite. In the interests of full disclosure, I own Saving Private Ryan and “Band of Brothers.” I’ve watched Ryan at least two dozen times and I’ve watched every episode of “Band of Brothers” multiple times. In both of those projects, the producers deliberately removed color from the film to preserve a somewhat outdated look, like what’s seen in the offcolor photos of the era we younger generations must rely on. In Red Tails, the picture is perfect, and I found myself unaccustomed to it. It’s not a bad thing, just something I’d grown used to. Other people may think I’m insane, which I may be, and it won’t change their opinion at all. To each their own.

I wanted to really like Red Tails. The story is one that every American should know and understand, as these men have not received nearly the amount of respect they deserved. The best thing about this film is that it will hopefully increase awareness and interest in the group, so that people might read up more on them and their exploits. As far as movies, though, it just felt too cliched. The layers of the characters they present aren’t subtle or nuanced; they’re pre-packed so clearly they become blatantly obvious. The struggles and the ending become so predictable that by the ending it is difficult to maintain any sense of emotion for any of the characters that the film had managed to build up to that point.

Red Tails was influenced by actual events, and it’s certainly possible that there were pilots in the squadron that were similar to the characters in the film. I don’t mean to diminish their accomplishments; I certainly respect the men for their sacrifices. The film simply presents them not as intriguing characters of history, but as characters of a movie we’ve seen too many times before. If George Lucas wants to finish his career on a high note, I hope he considers going all-in on a final Indiana Jones film, because if this is it, he’ll be going out with a whimper.