When is Steve Carrell Leaving NBC’s “The Office”? Sooner Than Expected 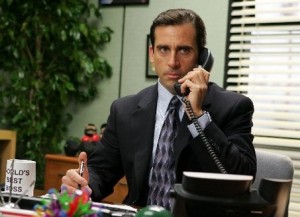 Some sad news for fans of The Office. It was announced last year that this would be Steve Carrell’s last season on the popular comedy, and many assumed that the farewell would be said in the season finale of 2011. Unfortunately, the actor is will be saying his goodbyes with 4 episodes remaining in the season according to showrunner Paul Lieberstein.

The remaining four episodes will show the scramble of who becomes of the new manager of Dunder-Mifflin’s Scranton office. Among those fighting for the position? Ed Helm’s Andy, Craig Robinson’s Daryl, Rainn Wilson’s Dwight, and a number of characters from outside the office. John Krasinski’s popular character Jim is said to be one of the characters not in the running for the position.

I’m trying to not see this as the beginning of the end for The Office, but it is getting quite hard. I’m not sure Carrell’s character is my favorite of the bunch, but he does bring something to the show that is hard to replace. I’m not sure anyone can do the awkward doofus as well as him, and not look like a total copycat.  The show might have to go in yet another direction.

Although, I might be counting my chickens before they hatch. The show still has a lot of seriously talented actors and writers working on it, and they might have a number of seasons still left.