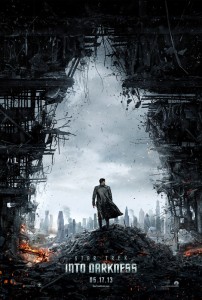 It is hard to believe that it has been almost 4 years since J.J. Abrams’ Star Trek hit theaters. It seems like just yesterday that we were reintroduced to Captain James T. Kirk, the Starship Enterprise, and the unforgettable crew. Luckily the long awaited sequel is just beyond the horizon, as Star Trek Into Darkness hits theaters on May 17.

The entire cast of Star Trek returns for the sequel, as does Abrams in the director’s chair. Kirk, Uhura, Bones, Scotty, Spock, Chekov, Sulu … all are back for Into the Darkness.

From IMDB, “After the crew of the Enterprise find an unstoppable force of terror from within their own organization, Captain Kirk leads a manhunt to a war-zone world to capture a one man weapon of mass destruction.”

Here are the first two teaser trailers for Star Trek Into Darkness that we have seen so far. The first debuted at Superbowl XLVII, giving us our first look at Benedict Cumberbatch – who is all but confirmed to be playing Khan. The latest trailer dropped today.

In Summer 2013, pioneering director J.J. Abrams will deliver an explosive action thriller that takes Star Trek Into Darkness. When the crew of the Enterprise is called back home, they find an unstoppable force of terror from within their own organization has detonated the fleet and everything it stands for, leaving our world in a state of crisis. With a personal score to settle, Captain Kirk leads a manhunt to a war-zone world to capture a one man weapon of mass destruction. As our heroes are propelled into an epic chess game of life and death, love will be challenged, friendships will be torn apart, and sacrifices must be made for the only family Kirk has left: his crew.

What do you think of the latest teaser? Let us know in the comments!