Stallone set to Write/Direct/Star in Rambo 5

Production for Rambo 5 has been greenlit, after the somewhat successful relaunch of the property last January. Sylvester Stallone is set to write, direct, and star once again. Given his age, it is a bit surprising that he is continuing to do such films, but as long as they draw an audience I guess it is worth it. 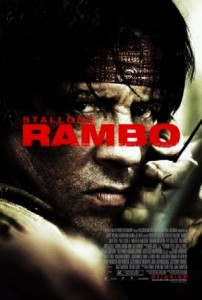 The upcoming project’s storyline revolves around Rambo fighting his way through human traffickers and drug lords to rescue a young girl abducted near the U.S.-Mexico border. Production will start in the spring.

Stallone had indicated in interviews that a fifth Rambo was in the works. He teamed with Nu Image/Millennium on the 2008 project, which grossed $42 million domestically and $113 million overseas.

Nu Image/Millennium is in post-production on “Expendables,” starring Stallone, Jason Statham, Jet Li and Mickey Rourke. The actioner’s set for release on April 23 through Lionsgate.

I’ve never been a huge fan of the Rambo series, I’ve always been more of a Rocky fan myself. I have watched all the films however, and I have enjoyed myself watching them time to time. Sometimes you just need to see someone go berserk and kill a bunch of bad guys for some stress relief.