The Rams entered a rain soaked Cleveland Stadium for their second preseason game verses the Browns  having to improve on all areas of their football team. Last week the offensive line was scared away by the imposing Minnesota Vikings defense and the Quarterbacks were the one to suffer. The wide receivers might as well have been watching from the stand for the effort they gave and the defense was just as good as last year, NOT VERY! All these areas had to do a 180 this week as the Rams were to face a team, in the Browns, that were rebuilding also.

Again, like last week, A.J Feely would start the game with the first team offensive line. New this week was starting running back Steven Jackson in the backfield! Feely      (pic 1)orchestrated a drive with pinpoint passing and a pounding running game from Jackson that resulted in an opening drive touchdown! We haven’t seen one of those in years!! The Rams jumped out to a 7-0 lead just 5 minutes into the game! On came the defense to test themselves against an aging Jake Delhomme and the young puppies from the dawg pound! 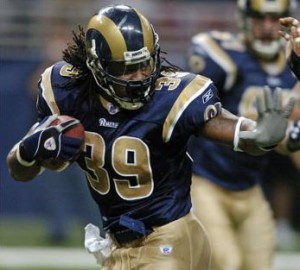 The defense angry from last weeks performance rebound hit bone jarring hits. with the assistance of mother nature they were able to take the ball away from the Browns 5 times during the game that resulted in 3 Josh Brown feild goals. The defense also pounded the Browns quarterbacks including young Colt McCoy who did nothing except get up off the wet grass the two series he was in the game as the Rams sacked him twice! (pic2)

St. Louis Ram fans, a question: What does $55 million dollars buy in todays economy? Answer a quarterback who goes 6/14 for 24 yards!

(pic3)Bradford was ineffective for the second week in a row narrowing his chances even further for him to start the season at quarterback. I personally believe this is a good thing. Let him study Feely and learn for a few games, then when he is ready and comfortable bring him in to lead the team. Now isn’t the time, and he is telling us all that with his inability to move the team down field. 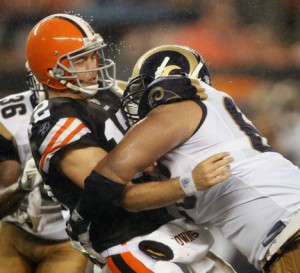 The shining star last night has to go to the special teams! Josh Brown was a perfect 4 for 4 in field goals and added an extra point to boot. Kick off coverage only allowed an average of 12 yards on punt and kick returns! That is a wonderful improvement. The other glowing stat to come from that sloppy game was that the Rams didn’t turn the ball over! If we can continue in this direction and bring the rookies along slowly we will see a 4-500% improvement over last season, aka 4 or 5 wins!

Now for the Bad news: #41 Antoine Thompson, Coach wants to see you and bring your playbook!!!! You are CUT!!!!! This is the worst ecuse for a professional football player I have ever seen. He doesn’t get within 10 yards of the receiver he is covering (mostly because they blow him off the line of scrimmage), then a quick move and he leaves his jock on the field and is burnt for a big gain (or touchdown).

Yes its preseason but we are Ram fans, we take what we can get!

Short week this week as the boys travel to New England for a Thursday night dance with Tom Brady and the Patsies!!!!