When I got there, though, I was immediately put at ease by the atmosphere. This was a gathering place for hardcore fans and the casually interested alike.

And so I went, not as an avid die-hard, but as a guy who had a solid interest in the subject. On Saturday, I was fortunate enough to be joined by my lovely friend Kat, who brought the child she nannys, George, who opted to dress up as Jango Fett. And so on Saturday I went not just as a fan, but as a paternal figure, which was pretty cool. Seeing a little kid’s eyes light up as he saw a world he’d never experienced before was pretty mind-blowing. George is a huge Star Wars fan, so seeing him pose to take pictures with folks dressed up as Jedi and Darth Vader was pretty rewarding. 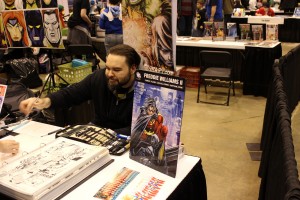 What really impressed me was the affability of the artists. Watching the interaction between fan and artist/author, I loved the fact that despite their stature in the world of comics, they’re still incredibly fan friendly and willing to offer advice for fans and young artists. I got to see Freddie Williams II (an artist/writer for DC Comics) do some sketches for one particular young fan; when he was finished, he looked through the fan’s personal sketch book and offered advice and his approval of several of the young man’s drawings. I met another writer, Cullen Bunn, who hails from St. Louis. I was so impressed with the easy-going nature of Cullen and Brian Hurtt (who created the The Sixth Gun series along with Cullen), I bought an autographed copy of Volume 1 of the series.

Of course, one of the trademarks of Comic Con is the costumes and outfits that people wear to the events. Ranging from basic game/film t-shirts to elaborate movie-quality outfits, a very good percentage. Kat and George dressed up and received compliments throughout the day. 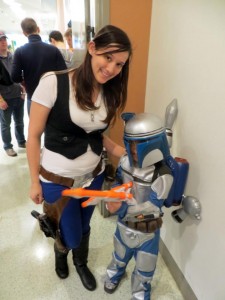 Wherever you looked, there were characters from just about every universe imaginable present. Nobody was self-conscious. It was interesting to see the amalgam of people joined together that, in every day life, may not associate with each other, came to Comic Con to celebrate common passions. That’s probably a little corny, but it’s absolutely true. Comic Con is meant as an escape, a chance for people to become whoever they want to become, and in the anonymity of an outfit, it’s really interesting to see who people try to be.

I got to sit in on several panels and Q & As with some of the actors and writers, and like everyone else, I was impressed with their honesty and candor. Many authors and artists (including the aforementioned Williams and Hurtt) offered their advice and candid stories about how they got their start in the comic world.

Of course, the bread and butter of any fan convention is the vendors. You couldn’t walk ten feet without walking past a table selling comics, t-shirts, fan merchandise, or outfits.

Need to get a t-shirt from your favorite movie or tv show? Done. Better yet, what about a hoodie or a robe? No problem.

Missing a comic from your collection? I think they had comics from just about every series imaginable present.

Want to get your portrait done by one of the artists? Check.

For what it’s worth, I did my part. 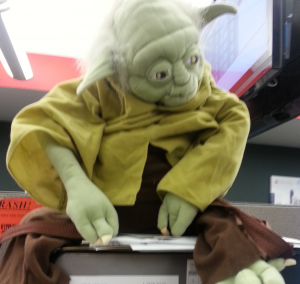