Addressing the Cardinals organization’s glaring need for a quality middle infielder, the team selected the 22nd overall pick Kolten Wong, a second baseman from the University of Hawaii. 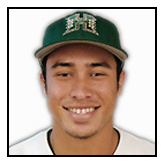 Should Wong and last year’s top pick Zack Cox join Albert Pujols in the infield someday, the Cardinals will be set with a Wong, Cox, and Pujols manning the dirt.

He can handle himself defensively at second base, but he was drafted mostly for his hitting prowess. He has above average bat speed and remains compact enough to hit for contact. He’s listed at 5’9″ and a solid 180.

With this pick, the Cardinals appear to have gotten a solid hitter at a spot where they sorely need a premium player. It’s fairly evident that Skip Schumaker is not the long-term answer at second. He was put there initially to get his bat into the lineup, but his defense has been at times questionable, and his batting average has dropped the last two seasons from .303 to .265 to .211 this season. He’s definitely the heart-and-hustle type player that Tony La Russa loves, but the Cardinals have picked what some scouts called the best or second-best bat in the draft, very similar to what they said about Cox last year.