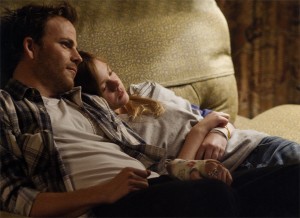 Early in Sofia Coppola’s career many people might have shouted that she was the product of Hollywood nepotism, but she has shown herself to have a flair for presenting characters in interesting new ways. Her films mainly market themselves to the trendy hipster set, and this trailer shows  us that things have not changed.  Phoenix and Julian Casablancas both have songs that ride over the trailer, which has very little dialogue.

This might be one of the most intriguing trailers I’ve ever seen without much dialogue. Everything is told through glimpses of images, and it has made me excited to see the return of Stephen Dorff.  I’m wondering how many people will be confused, and mistake Elle Fanning for her older sister, Dakota.

Now we only have to wait until the winter to see this.  Which is way too long of a wait.

Writer/director Sofia Coppola reunites with the film company with which she made the Academy Award-winning hit “Lost in Translation.” Her new film is an intimate story set in contemporary Los Angeles; Johnny Marco (Stephen Dorff) is a bad-boy actor stumbling through a life of excess at the Chateau Marmont Hotel in Hollywood. With an unexpected visit from his 11-year-old daughter (Elle Fanning), Johnny is forced to look at the questions we must all confront.