SLEEPWALK WITH ME Opens September 14 In St. Louis! Enter to Win Passes to the St. Louis Advance Screening! 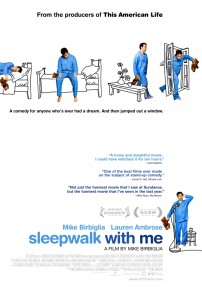 Winner of a 2012 Audience Award at Sundance, comedian Mike Birbiglia wrote, directed and stars in this sincere and hilarious film, based on his off-Broadway show and bestselling book. It’s also the first movie co-written by Ira Glass and co-produced by “This American Life.” The story: when an aspiring stand-up fails to express his true feelings about his girlfriend and his stalled career, his anxiety comes out in increasingly funny and dangerous sleepwalking incidents. SLEEPWALK WITH ME features Lauren Ambrose (“Six Feet Under”), Carol Kane (“Taxi”), James Rebhorn (“Meet the Parents”), Cristin Milioti (star of Broadway’s “Once”), plus comedians Marc Maron, Kristen Schaal, Wyatt Cenac, Jesse Klein, Henry Phillips and David Wain.

Screening will take place Thursday, 9/13 at the Tivoli (7pm).

SLEEPWALK WITH ME OPENS SEPTEMBER 14TH IN ST. LOUIS