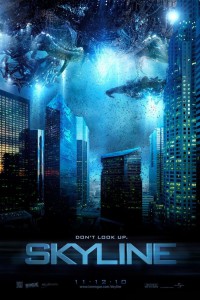 When I first saw the trailer for Skyline I was actually pretty excited.  District 9 was one of my favorite films of last year.  Similar to that film, Skyline boasts some impressive visual effects on a meager budget.  But the last shot of that first trailer brought me two steps back in my excitement level.  I hated the shot of the humans rushing up into the alien spacecraft.  After many more clips and trailers, I went into the film with little hope that it would work.  Walking out of the film I had only one thought: it was worse than I anticipated.

The film opens with strange blue lights beaming down from the sky.  Our main characters are awoken and curious to what is going on.  As our main protagonist looks out at the light his eyes and skin appear to be burning as he appears to be in some kind of a spell.  Flashback 15 hours earlier, and we meet all of our main characters.  Jarrod (Eric Balfour) and Elaine (Scottie Thompson) our visiting Jarrod’s best friend, Terry (Donald Faison), for his birthday in LA.  He is some kind of effects big shot with a lavish penthouse apartment, cute publicist that follows his every move, and a blonde trophy wife.  They party hard and wake up to where the movie started.  They soon discover the spaceships are here to suck up humans.  Jarrod leads the group in their (stupid) quest to try to escape out to the beach.

I, along with most of the audience, was along for the ride for the first third of the film.  This was mainly due to the fact that we were all curious at exactly what was going to take place.  When the aliens actually get here then the story really falls apart.  Translation: there was no real story.  We got alien spaceships.  We got the sentinals from The Matrix franchise.  We got the big , muscular brother to the Cloverfield monster.  The writers wanted to see it all so they threw it all in there.  The dialogue was terrible.  The characters never give you a reason to become emotionally attached even though the writers try their best with a needless pregnancy sub plot.  The characters’ actions are pointless and just make them look stupid.  The movie brought me in due to the idea of the plot, but nothing about it kept me engaged.

On the positive, the special effects in the film do look good.  There are some shots that are extremely cool to look at.  Scenes involving the independent alien “sentinels” were neat to look at with their tentacles and the way they moved.  But, as stated before, we saw them in The Matrix.  Outside of the effects there is nothing really redeeming this movie for me to tell you to go out and see it.

With a $20 million budget, the public’s curiosity in aliens, and an okay trailer the film will be profitable.  I would imagine a sharp decline after this weekend though when word gets out how bad this thing is.  If you are going to the theater there are much better films to see this weekend.  If you do see it, don’t say I didn’t warn you.

Skyline gets an F