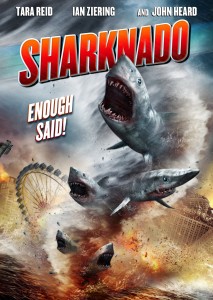 Courtesy of the cheese factory known as The Asylum, SyFy channel offers up their latest serving, Sharknado.

If the name isn’t enough of a hint, the storyline says it all:

Now, I am the first to admit it: I love me some cheese. My particular palate is more finely tuned to the giant monster plate, but I can appreciate a nibble from the natural disaster assortment from time to time.

And how does this taste? Bad. I know, I know, what did I expect… hey, I actually enjoyed Roger Corman’s Sharktopus. And Mega Piranha… or most of the “Mega” movies, for that matter. But I knew something was amiss when this premiered on a weeknight, rather than a Saturday night, which is pretty much the sacred ground of spectacular cinematic cheesiness.

When I was a kid, I spent my Saturday evenings under a flickering, cathode ray tube spell, watching something called “Creature Features”, which was a double-or triple-feature of whatever horror, sci-fi and monster movies the local UHF station could package. And it was here where I discovered the Creature from the Black Lagoon, met Dr. Phibes, went below 20,000 fathoms and flew high above with Rodan. Every Saturday night, I’d watch movie after phantasmagorical movie, every Sunday morning, I’d wake up with nightmares and the suggestion from my parents that, perhaps, it was time to give the monsters a rest (which I successfully argued against.) It was bliss.

So put a big, ol’ stinky plate of cheese in front of me any Saturday night, and I’ll bite. What Sharknado served, however, left me with a bad taste in my mouth.

Sharknado stars TV heartthrob Ian Ziering plays Fin, a pro-surfer/master rock climber/bar owner – in some prime real estate right on the end of Santa Monica Pier, no less – who can’t seem to get away from the endless swarm of sharks making their way across the beaches, through the streets and in the air, courtesy of Hurricane David. Reluctantly joining Fin along the way is a ragtag assortment of characters, including former runway fixture, Tara Reid, and “that guy in that one movie” John Heard, serving as a reminder that acting talent can apparently wear off (although, as the movie’s comic relief drunk, he wields a mighty barstool of justice as though it was Mjolnir itself.)

The movie is a mess… but not so much of a bloody one (in fact, the death scenes are too few and far between to add a campy flair, though some less discriminating gorehounds may find themselves satisfied.) Continuity is non-existent – it’s day, it’s night, nope, day again. The streets are flooded! No, just a trickle! Whoa, the car is being swept away!

By the time the actual sharknado forms – past the hour mark – with thousands of chomping sharks spinning within the water spout-turned-tornados, you’ll be wondering less about how the sharks are actually able to survive out of the water for an endless amount of time, and more about how the tornados seem to be affixed to the same three geographical locations without moving.

Maybe it was the breach of tradition in watching this movie on a weeknight, but this cheese stinks. Sharknado blows.