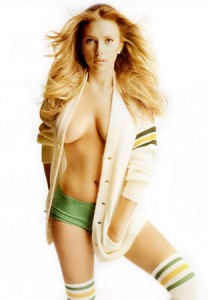 There has been a lot of talk about Oscar nominee David O. Russell’s next film Uncharted.  Fans had been vocal about the casting of Nathan Fillion in the lead role.  Then Mark Wahlberg was announced to play the lead character.  To add insult to injury Russell stated that he wasn’t familiar with Fillion when asked about how close he was to landing the role.  Robert De Niro and Joe Pesci have also been said to sign onto the film.

David O. Russell is pretty popular right now, and he recently sat down with Empire magazine.  Uncharted came up and the interviewer suggested Amy Adams as the lead female.  Russell was quick to bring up Scarlett and then said “we’ll see how it works out”.

I know nothing about the games or the character so I’m not sure if ScarJo is right for the part.  But her schedule looks free cause the only thing she is attached to as of right now is The Avengers.  Between this and her role as the Black Widow, is Ms. Johansson going to become an action heroine?

Do you think Scarlett is the right woman for the job?