The Galaxy S II first debuted on February 13th at this year’s Mobile World Congress and launched in South Korea (Samsung’s home-base) on April 29th. Just 10 days after release, Samsung was looking at 3 million pre-orders worldwide. At that point in time, the only countries actually selling the device were South Korea, the U.K., and Austria. Over the course of the next few weeks, it spread across Europe without any mention of a possible U.S. release date. Sales numbers from BGR show that during the first 55 days of availability, Samsung sold 3 million Galaxy S II handsets. Then just 30 days later, they were celebrating another 2 million sold. That’s 5 million GSII’s in 85 days! 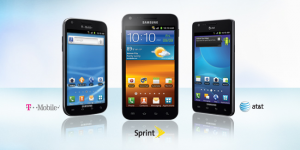 The wait is finally over, as Samsung revealed yesterday at a press event that the United States will be indeed receiving variants of the Galaxy S II smartphone for AT&T, Sprint, and T-Mobile. The Sprint handset will be called the Epic 4G Touch, a nod to its older brother from the GS1 line. Sprint will be hitting the market first on September 16th, with the other models seeing release after the head start from the Now Network. T-Mobile is looking for a Fall release, and AT&T is hoping to have their version out before then.

The specs for the American GSII were a bit varied from rumor to rumor. The news leaks have gone back and forth between seeing NVIDIA’s Tegra 2 processor or a Samsung-branded Exynos chip. Other rumors have been flip-flopping which screen size and type would make it across the pond: 4.3″/4.5″/Super Clear LCD/Super AMOLED Plus. Lastly, there were rumors of later versions of the device getting some NFC action, which the European models are currently lacking.

Sprint’s handset will indeed get 4G WiMAX support at a cost of being slightly larger than its European brethren. The Epic 4G Touch is also getting a bigger battery, no doubt related to the addition of that 4G radio. Samsung has not included NFC in the Sprint model, which would have added even more girth to the 4.52″ monster of a handset (However, both GSM models are getting NFC support). Still, the phone is incredibly thin at a mere 9.59 mm. The iPhone 4 was once the thinnest smartphone in the world at just 9.3 mm, having now taken a backseat here in the U.S. to AT&T and Samsung’s accomplishments with the 9 mm Infuse and its new sibling, the 8.89 mm Galaxy S II. The AT&T model most resembles the international GSII’s currently on the market.

In order to differentiate the new GSII on AT&T’s lineup from the 4.5″ Samsung Infuse, they opted for a smaller 4.3″ screen. As strange as it was jumping up to a 4.3″ screen, I have gotten very comfortable with it and wouldn’t have it any other way. Somehow I doubt I would feel the same way about scaling to a 4.5″ screen, so my preference between all three models is with AT&T’s thinner GSII.

The only downside I see to taking the plunge on the new Samsung flagship is the screen. Yes, Super AMOLED Plus is awesome, but WVGA is not. The 480×800 resolution is lacking, especially for a high-end smartphone…

… especially when stretching it across 4.3″…

… especially when stretching it across 4.5″…

… especially for your company’s flagship phone…

… especially when you are the manufacturer of the screen itself.

I imagine it will be a deal breaker for those coming from an iPhone 4. Colors and contrast are great and all but unless you’re using two different phones side-by-side, you won’t know that your blacks are darker or your colors more vibrant. What you might notice instead is 206.4 pixels per inch not being anywhere near the iPhone 4’s 329.65 ppi.

Let’s take a look at what will actually be shipping here in the United States: 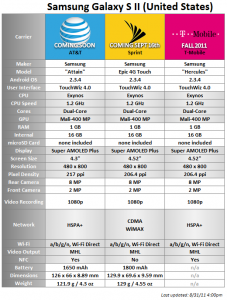 Click on images to enlarge, comparison of the new GSII line against current and future handsets 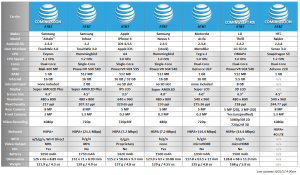 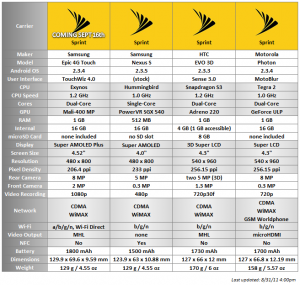 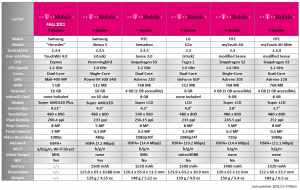 Only one question remains: do I buy one of these or wait for the next superphone? With AT&T’s first LTE phone coming from HTC, it could easily stand toe-to-toe with the new GSII line with the latest version of the highly praised Sense UI laid on top. Then there’s also the possibility of picking up the next Google-branded Nexus phone headed to Verizon in October. So many choices… so little pockets!

For more info, check out the in-depth hands-on videos taken from Android Central for the Sprint and AT&T models, as well as a brief look at the upcoming T-Mobile version.