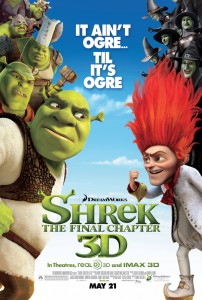 Shrek is back and this time our hero (Mike Myers) is experiencing a midlife crisis of sort. He and his bride, Princess Fiona (Cameron Diaz) are the parents of triplets and Shrek is bristling at the repetitious mundanity of domesticity longing for the days when he could take a mud bath in peace. Instead, he’s been reduced to roaring on request for the very same villagers who previously cowered in fear at the mere mention of his name. It’s this existential dilemma that leads him to take Rumpelstiltskin (Walt Dohrn) up on his offer of one last day as a menacing monster. Of course, these deals always have strings attached. In this case, those strings result in Rumpelstiltskin becoming the King of Far Far Away while none of Shrek’s friends or family has any recollection of him ever existing.

After the awful excuse of a film that was Shrek the Third (or, as we call it in the Qbert household “Shrek the Turd”), expectations were remarkable low for Shrek Forever After, the fourth film in a franchise running on fumes. And hearing that the (allegedly) final Shrek film would essentially be a retread of It’s a Wonderful Life isn’t exactly the sort of thing that engenders confidence. However, jettisoning the premise of the first three films seems to have been just the kick in the ogre that the filmmakers needed. The movie is certainly the darkest of the four films as Shrek is required to recapture Fiona’s heart before sunrise or be wiped from existence. Rumpelstiltskin has turned the kingdom of Far Far Away into a dilapidated dystopia where the citizenry is subject to his whim and forced to enter into one-sided contracts in order to survive. Dohrn (he only sounds like Paul Reubens) is magnificently malevolent in the roll.

The film still contains many of the tropes that we’ve come to expect from a Shrek film. The twisted takes on fairy tales and the obligatory pop-culture references. Thankfully, those things are muted here. In their place we are given things like “story” and “character development”, a rarity in (non-Pixar) animated fare and virtually non-existent in the film’s predecessor. By and large, the jokes serve the story instead of the other way around. There are admittedly sections that are a little light on humor but the story more than makes up for it. And I’d prefer no joke to a forced, unfunny gag that only exists to up the number of overall jokes.

The filmmakers still fall back on poop jokes (yawn) and seem to think that a donkey (Eddie Murphy) singing pop songs is hysterical (it’s not). And as the rapidly aging franchise develops clichés all its own, all those Disney potshots it’s taken over the years are starting to feel increasingly hypocritical. But the ship has been largely righted after the previous derisible outing.