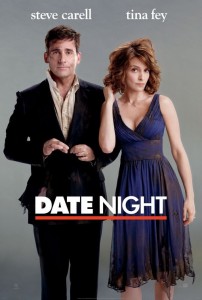 Steve Carell and Tina Fey team up to play Phil and Claire Foster in the new movie Date Night. The Fosters are a typical (“typical” for the movies anyway) married, middle-class couple. They have two children and both have successful careers (the parents that is, not the children). However, as is often the case, the rigors of daily living have relegated their marriage to the back-burner. They haven’t fallen out of love, per se, but they have fallen into a rut. In an attempt to break out of said “rut” Phil decides to treat his wife to dinner at a trendy New York City restaurant. Unable to get a table, they impersonate a couple who have skipped out on their reservations; a couple who, unbeknownst to the Fosters, are on the run from the mob. Hilarity ensues (theoretically) as they desperately attempt to extricate themselves from an inordinately unfortunate case of mistaken identity.

As I sit here staring at a blank page while trying to formulate a cogent opinion, I’m stricken by the fact that a movie such as Date Night is quite possibly the most difficult type of film to review. Neither good nor bad, the film is…pleasant. Critiquing the plot is practically pointless as it exists for the sole purpose of placing our protagonists in awkward/dangerous situations so we can laugh at their reactions. Fey and Carell, two of the sharpest (mainstream) comedians working today, do yeoman-like work in an effort to rise above the material. And occasionally, they even manage to succeed. The rest of the cast is game as well. Mark Wahlberg plays a comically shirtless mercenary-for-hire willing to help the Fosters, while James Franco and Mila Kunis play the actual reservation-skipping couple for whom the Fosters are repeatedly mistaken.

As the credits roll, we are treated to an old Hollywood standby: the outtake reel. It consists almost entirely of alternate jokes being riffed on the spot by Carell and Fey. It’s a frustrating send-off in that, almost without exception, the alternate jokes are funnier than their official counterparts. It’s almost as if the director was afraid of offending the screenwriter.

The film comfortably coasts along, largely on the charm and charisma of its two stars. And while it never quite sinks to the depths of a similarly themed film like The Out of Towners (the 1999 remake, not the delightful original), neither does it achieve the surrealistic lunacy of a movie like Martin Scorsese’s After Hours. In fact, it is probably a perfect choice precisely for people like the Fosters: a married couple on a “date night.” It chugs along at a brisk pace without ever challenging its audience, seemingly content to merely amuse. And that’s a compliment when compared with most studio comedies these days…I suppose.