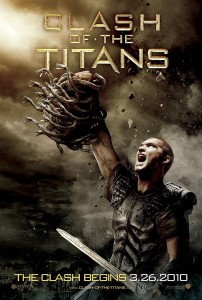 The original Clash of the Titans is perhaps best-known as (with my apologies to Harry Hamlin’s abs) the last major work of the master of stop-motion animation Ray Harryhausen. Harryhausen, though still very much alive, found his services no longer required after the advent of CGI and the rise Industrial Light & Magic. He began his animation career with Mighty Joe Young before giving us films like Jason and the Argonauts and The 7th Voyage of Sinbad. But by the early ‘80s technology was beginning to surpass the painstaking craftsmanship of an artist like Harryhausen. It was faster, better and (most importantly) cheaper to utilize the burgeoning computer technology. His final feature has lived on as a cult classic. However, here’s the problem, um…the original isn’t that good. “But, but, but,” the 10-year old in you stammers, “That movie kicks ass!” First off, you’re 10-years old and you shouldn’t be using words like “ass”. Second, the love you have for this film is fueled largely by nostalgia. And that’s ok. I mean, it’s the same reason we love our parents, right? But that doesn’t make them any cooler. While some would argue that this beloved film shouldn’t be remade, I would argue exactly the opposite. The film was merely a framework to show off the special effects of the day. In the last 30 years, Hollywood has taken that concept and turned it into their entire business model. This is precisely the sort of film that should be remade: a weak story that can truly be served by the advances in technology. Which makes the new Clash of the Titans all the more disappointing.

This time out Sam Worthington, fresh off the success of Avatar (yeah, it was all him), plays Perseus. He is the son of a human, Danae (Tine Stapelfeldt), and a god, Zeus (Liam Neeson). A lineage that affords him unique battle abilities that he promptly refuses to utilize for 2/3 of the film. As the movie opens, mankind is preparing to wage war against the gods. In an effort to win back their love, Zeus sends Hades (Ralph Fiennes looking like a reject from Battlefield Earth) to demand that they sacrifice Princess Andromeda (Alexa Davalos) or else the gods will release the kraken, a ginormous sea-monster that will destroy them all. I believe this is what Dr. Phil typically refers to as “tough love”. To prevent this fate, Perseus joins a ragtag group of Grecians on a mission to kill Medusa (Natalia Vodianova) and use her head to turn the kraken to stone.

The film’s primary sin (of which there are many) is that of tedium. There’s very little action until the final half-hour. The cast seems to meander from one scene to the next; only accidentally stumbling in to the occasional action scene. Everything about the film feels obligatory, as if it were forcibly beholden to its predecessor’s storyline. For a movie that features a battle with a kraken, it sure is serious. And it’s this air of pomposity that ultimately brings the film crashing down. Where’s the fun? You’re fighting giant crabs and riding on flying horses, for Zeus’ sake! Clash of the Titans ends up drowning in its own sense of self-importance with barely a hint of wit or charm; an utterly joyless affair with neither heart nor soul.

Adding to the blandness, the look of the film is almost devoid of color. While the movie is being screened in 3D I would strongly advice against paying the up-charge. The film was shot in 2D and only retroactively converted to 3D based on the success of Avatar…and you can tell. I removed my glasses for a large swath of the movie and the difference was negligible at best. By my reckoning, only key scenes got the full 3D treatment. The vast majority of the film was simply tweaked around the edges (if at all). Honestly, it borders on fraudulent.