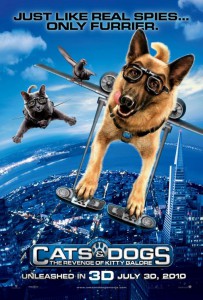 Has there ever been a movie more destined for Wal-Mart’s $5 bin than Cats & Dogs: The Revenge of Kitty Galore? If there has, I’d sure like to see it. On second thought, scratch that. No, I wouldn’t. A sequel to Cats & Dogs, the 2001 film that was a surprise hit. It centered on a world where cats and dogs were locked in a “James Bond-esque” battle for world domination with dogs cast in the role of hero and cats as the duplicitous villains. Kitty Galore (voiced by Bette Midler) is a hairless Sphynx cat bent on obtaining the technology capable of emitting a tone that can cause dogs to turn on their owners. With the lives of both dogs and humans at stake, cats and dogs are forced to unite in order to fight a common enemy.

The first 20-minutes are surprisingly strong for a film of this sort. Nick Nolte (as spy-dog veteran Butch) does a nice, but subtle, send up of 48 Hrs. And the puns (“fighting the war on global feline-ism,” “protecting America from all enemies foreign and domesticated”) are clever as far as puns go. However, the film quickly descends into the same old hackneyed film parodies (James Bond, Hannibal Lector) that have already been done to death while the puns become ever more groan-inducing. The voice-work is scattershot. Some actors have committed, clearly giving the project their all (Katt Williams, Bette Midler, James Marsden) while others are simply phoning it in (Christina Applegate, Roger Moore, Chris O’Donnell). Nolte sounds so out-of-it at times that he’ll probably be surprised to see the movie pop up on his IMDB credits.

In the days before CGI, this genre had a certain amount of “Wow Factor” as we tried to figure out just how they got the animals to do the things they’re doing. However, technology has robbed us of even that simple charm. The film is mildly amusing in spots but mostly a tired retread of the original. The younger children will most likely be entertained but you can manage the same feat (at a fraction of the cost) by simply renting the original.

On a side note, attached to the film is a brand new Roadrunner cartoon. It’s a computer animated 3D treat that brings the classic duo into the 21st century. Thankfully…mercifully…blessedly…the short features all of the original versions’ mayhem and, most importantly, violence. Wile E Coyote gets crushed, hit, abused and blown-up repeatedly and it’s a joy to behold. My only complaint was that the short was just that…short. It felt like it clocked in at about 2-minutes. Perhaps it was really that short or maybe it was just that fun…or maybe it was a little of both. Here’s hoping Warner Brothers makes more.