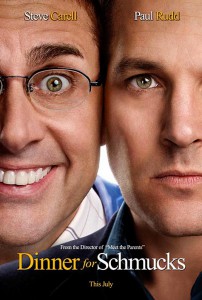 Based on a French film (has that ever worked?) Dinner for Schmucks stars Paul Rudd as Tim, an upwardly mobile businessman who finds himself at a career crossroads when his boss invites him to partake in a secret tradition he calls a “dinner for idiots.” It’s a regularly scheduled event in which Tim’s boss and coworkers each invite a “loser” to dinner in order to laugh at them behind their backs. Tim is repulsed (you know, because he’s our hero and all) but feels obligated to take part or risk his future with the company. He takes it as a sign from the heavens when fate drops Barry (Steve Carell) into his life. Barry is a divorced IRS bureaucrat whose primary form of enjoyment is collecting dead mice, stuffing them and putting them into various themed dioramas that he calls “mouse-terpieces.” Of course Barry is a whirlwind of destruction; systematically dismantling Tim’s life with each decision he makes.

Carell and Rudd are masterful comedic actors. Both are at the top of their games, and both are completely squandered in this dreadfully insipid excuse of a comedy. The film contorts itself in order to put the two leads together before the actual dinner takes place and every choice they make rings false. Carell’s Barry is an idiot but only when it serves the purpose of the plot. Characters repeatedly go out of their way to behave in a manner that will create chaos and conflict when mere moments of common sense would easily avert it. The film is full of the sort of “wacky hijinks” and “farcical misunderstandings” that would have felt feeble in even the most middling of Three’s Company’s episodes.

Zach Galifianakis, Hollywood’s current comedy “It Boy,” turns up as Barry’s boss Therman who fancies himself a mind control expert a la The Amazing Kreskin. While his performance is solid, it feels as if he dropped in from another film entirely. Meanwhile The Flight of the Conchords’ Jemaine Clement plays the sort of clichéd narcissistically avant-garde artist that should have been retired from film decades ago. It’s a role clearly intended for Russell Brand and he’s missed deeply. Carell and Rudd fight mightily to salvage the proceedings and, make no mistake, they deserve full credit for the handful of laughs to be found here. But even they are incapable of upping the joke quotient to an acceptable level. It was at about the halfway point, when Carell is thrashing his arms wildly in attempt to spank himself, that I realized that the film was both figuratively and literally flailing.

Jay Roach’s ham-handed directing style might work for his broader comedies such as Austin Powers: International Man of Mystery (et al) and Meet the Parents but this is a film that calls for a subtler touch. And it’s a touch that Roach sorely lacks as he repeatedly hammers home the movie’s theme of acceptance. Dinner for Schmucks spends 90-minutes asking us to laugh at the “idiots” in question, only to then disingenuously tack on a coda dedicated to tolerance. We’ve come to expect this sort of hypocrisy from an Adam Sandler vehicle, but Carell and Rudd deserve (and should know) better. The movie is intended to be social satire masquerading as a comedy of errors but manages almost of none of those things. It’s certainly not a “social satire.” Hell, it’s barely a “comedy.” Sadly, the only part it got right was the “error.”