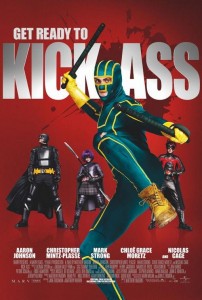 A movie with a title like Kick-Ass is to be judged by one criterion and one criterion alone: the degree to which “ass” was “kicked”. Acting, writing, effects, cinematography? All these are secondary, merely members of a mosaic, weapons in arsenal…an arsenal that’s only purpose is to, in fact, “kick” your “ass”. So let’s just cut to the chase, shall we? Yes. Yes, yes, yes. A thousand times yes. There was much ass-kicking to be had.

Aaron Johnson stars as Dave Lizweski, a sheepish teenage comic book collector who, for no real reason other than boredom, decides to become a superhero. It’s the first of many comic book conventions (no pun intended) that the film tweaks. Of course, costumed vigilantes are supposed to be angst-filled vanquishers haunted by a cataclysmic event from their past that fuels a never-ending quest for vengeance and/or justice. Instead, we get a kid who’s kind of bored. After modifying a scuba suit that he bought online, he adopts the moniker “Kick-Ass” and ventures into the world to fight crime…with less than stellar results. However, he becomes a media sensation when one of his outings ends up on YouTube. 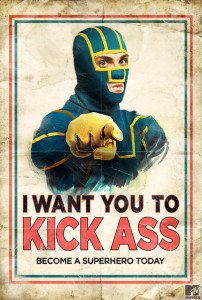 Unbeknown to Kick-Ass, there is already a burgeoning superhero team in his city: the father/daughter team of Big Daddy (Nicolas Cage, likable in way he hasn’t been in years) and Hit-Girl (Chloe Moretz). Big Daddy is obsessed with fighting crime and has raised his daughter with the singular purpose of waging this war by his side. And of all the “kick ass” things in Kick Ass…Hit-Girl is the kick ass-est. While the film might not bare her name, she’s who everyone will be talking about. There will unquestionably be those appalled at the character. After all, she’s foul-mouthed (with a capital “C”) and collects confirmed kills the way other kids her age collect Pokémon cards. She’s a 12-year old, hyper-violent, crass, 5 foot 2 inch killing machine…and she’s absolutely adorable. It’s precisely this juxtaposition of cute and crude, violence and virtue, that makes the character so appealing and, undoubtedly, controversial.

By turns irreverent, sadistic, hilarious and absurd the film manages to be something so many comic book films are not: fun. Sure, The Dark Knight was a great film but, honestly…was it a fun film? Kick-Ass, not in spite of its ill-mannered nature but because of it, brings a visceral sense of playfulness that so many of its more pedigreed counterparts seem to be lacking. It’s a high-energy, high-concept, action-packed comedy that manages to be both shocking and heart-warming. By no means is it a perfect film, getting a little hamstrung by its own machinations around the half-way point, but it quickly recovers by smartly amping up the dark humor and underage gunplay. Hopefully somewhere a sequel is being prepped before Moretz is too old to play Hit-Girl.