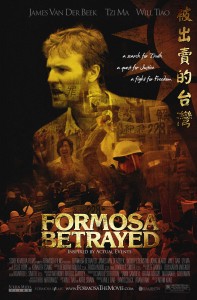 Inspired by actual events, “Formosa Betrayed” is an interesting look into events that not many Americans are familiar with. Written by Will Tiao and directed by Adam Kane, the story is an intriguing political thriller centered on murders that took place in Taiwan during the 1980s.

FBI Agent Jake Kelly, played by James Van Der Beek, is investigating the murder of a Taiwanese professor that took place in Chicago. Clues lead him to Taiwan, where he helps to track down the killers. There he meets an American official named Susan Kane (Wendy Crewson) and Kuo (Tzi Ma) of the Kuomintang of China who assist him in the search. But Jake soon realizes that things are note what they seem, after meeting a Taiwanese activist named Ming (Will Tiao) who helps him discover the truth.

“Formosa Betrayed” does a good job of keeping things moving, as we follow Van Der Beek’s character from scene to scene. The story is well paced, and keeps the audiences interested as he unravels the mystery behind the killings. The film is shot well, switching between interesting angles as we are taken to what truly appears to be Taiwan in the early 1980s. Filming took place primarily in Thailand, due to the growth of Taiwan over the past several decades that made it too modernized for filming. But the crew did an excellent job with the location that they shot, making it virtually impossible to detect any differences.

James Van Der Beek gets most of the screen time as Agent Kelly, and does not disappoint in the lead role. I was impressed with his acting, as he portrays the American that is far from his home. Like most of the audience that is watching the film, his character does not speak Chinese and knows little about the country. Seeing things through his eyes allows us the to experience the same enlightenment as he experiences during the investigation. Another surprise is writer/producer Will Tiao, who passionately plays the activist that helps Kelly uncover the truth behind the killings. This story is his baby, and it shows during his performance.

“Formosa Betrayed” tells a story that is based on actual events, and does so with heart. The film is a solid political thriller that gives us insight into a in a confilt that many are unaware of. With strong performances and enough action to keep things moving, ‘Formosa’ feels less like a history lesson while it gets across its point.

“Formosa Betrayed” is a B