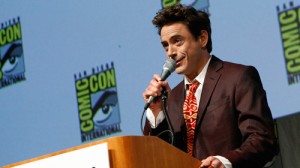 I was originally excited to see that Robert Downey Jr. would be teaming up with his Iron Man director for another project.  It seems I made the mistake of giving my hopes up too quick of seeing Downey and Faverau work on another comic book adaptation, Cowboys and Aliens.  The movie is still moving forward with Faverau, but Downey will not be starring due to obligations with his Sherlock Holmes series.

Cowboys and Aliens is about a group of aliens who try to enslave the Wild West only to have the local Cowboys and Indians fight back against their oppressors.  Downey was set to play head of the uprising, Zeke Jackson, a gunslinger who knows how to take down the outer space aliens. This would mark a third franchise that Downey would have obligations to, including his current franchises Iron Man and Sherlock Holmes.

So, does this mean that the Sherlock Holmes sequel is now fast tracked since Downey can’t do this film? There is a good chance of that, especially since the current film is having decent grosses with a sizable amount of competition. Most likely this was done to clear up room in the bust actor’s schedule, and there just in case a Sherlock Holmes sequel was brought in quickly.