The WWE’s 4th biggest pay per view of the year, Survivor Series, took place on Sunday night. And that’s about the most favorable thing I can say about it.

Anyone who forked over $55 of their hard-earned money was fortunate to see a Divas elimination match, John Cena beating Alberto Del Rio for the millionth time, and an over-the-hill and injured Big Show losing to Randy Orton. Yes, what once was one of the WWE’s biggest and best pay-per-view’s looked like a bad episode of Monday Night Raw.

It is becoming more and clearer to WWE viewer’s that the company does not care what the fans think. Speaking of the fans, anyone who watched the pay per view last night obviously could hear the displeasure of the fans’ in attendance over the main event of Orton vs Big Show. Once again, the WWE ended a pay per view with a boring, slow match that ended with a…wait for it…a screw job ending! Are you serious? Another WWE pay per view ended with a screw job? That’s right boys and girls, the WWE product is officially screwed over the customers once again. 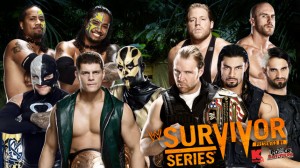 If you got to see the first match of the night, which featured the 6-man elimination match of the Uso’s, Rey Mysterio and the Rhodes’ against The Shield and the Real Americans, then you saw the best thing about the pay per view. In all actuality, the match didn’t feature anything you would not see on Monday Night Raw. Hopefully the match was Roman Reigns coming out party. Reigns ability to take bumps and show off his raw power was the highlight of the match. I’m praying that WWE is about to break up The Shield and give Reigns a major push that he deserves.

It’s not even worth mentioning CM Punk and Daniel Bryan’s match against the Wyatt’s. It wasn’t horrible, but nothing special either. To say that Survivor Series lived up to my expectations would be a lie, because those expectations were not up to begin with. The lackluster pay per view met and at times exceeded my already low expectations. The WWE has totally sucked for about 4 months now. With just three weeks until the final pay per view of 2013, I’m hoping the tide will change, but I will not hold my breath. It’s been a rough year for the WWE product as a whole. Tables, Ladders, and Chairs is the final pay per view of the year, and generally, one of my favorite to watch. I am not overly optimistic it will be much better than Survivor Series, given the latest downward spiral the company is on, but a guy can hope, can’t he?

Overall, Survivor Series continued the WWE’s latest trend of poor pay per view’s. It’s getting to the point that there is no point in ordering a WWE pay per view. Survivor Series gets a grade of an F. If there was a lower grade I could give, I probably would.