This week’s edition of Monday Night Raw was, in my mind, a pivotal episode for the WWE. Not only did the WWE deliver a solid show, they got fans excited for the granddaddy of them all, WrestleMania 30.

Raw kicked off with The Immortal, and leathery looking, Hulk Hogan making his way to the ring. The Hulkster still looks good for his age, 60, but he needs to drop the boa, it’s very unmanly. I was expecting Hogan to be a bigger part of the show then he was, unfortunately, all he did was pimp out the Network. So, the first 10 minutes of Raw was Hogan selling the Network and announcing he was named the host for WrestleMania 30. Not exactly what I expected from the Hulkster, but anytime the greatest professional wrestler alive can return to Raw, it’s a good thing and a ratings grabber. 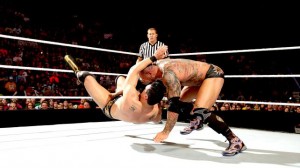 The first match of the night was a rematch between Alberto Del Rio and Batista. Yes, a rematch from the Elimination Chamber pay per view, because the match was just so thrilling the first time around, right? The Animal is going to have to turn heel. The crowd absolutely hates Batista. They booed him the entire match. After Randy Orton came out to the stage, Batista was distracted and Del Rio rolled him up for the win. Following the upset, Batista let loose one of the funniest quotes of the night. “If they cheer me, I cheer them back. If they boo me, I boo them back.” Really? I guess it’s hard to come up with a good comeback when you have all that muscle. On a serious note, I am praying they change the main event of WrestleMania. It will be a nightmare if the WWE decides to go ahead with the main event without Daniel Bryan. Fans may riot if that happens.

The Big E and Cesaro match was phenomenal. I really enjoyed this match of future stars. Both had a good amount of offense. Even though it ended in disqualification, both men looked solid. It appears that a rift may be forming between Jack Swagger and Big E. Could this be a potential WrestleMania match?

Next up, John Cena came to the ring. After pimping the network, he called out Bray Wyatt. As the Wyatt’s made their way to the ring, I knew this would not end well for the face of the WWE. Not only did the Wyatt family beat down Cena, they caused him to leave on a stretcher with an apparent leg injury. No doubt that this feud is heading for WrestleMania. This should be a great feud to watch.

In the match of the night that no one cared about, Sheamus faced off against Christian. I actually fast forwarded through this one. I could care less about either one of these jabronis. Hey WWE, we need a character change, fast!

The Daniel Bryan and Kane match was enjoyable to watch just based on the fact that Bryan won. I have never seen a wrestler so over that continues to be ignored for the title. After the match, we get a pissed off DBry, as I call him, challenging Triple H to a match at ‘Mania. This is apparently what fans want, well kind of. I still think we will see DBry in the ‘Mania main event.

The only down part of the night was the match between the New Age Outlaws and the Uso’s and a Divas match. I won’t even comment on the Divas match, but I am hoping that the Outlaws do not get a WrestleMania match. It’s the Uso’s time, they should have the belts. I’m so done with the Old Age Outlaws.

Finally, the best segment of the night belonged to Brock Lesnar and The Undertaker. I have never seen Lesnar manhandled the way he was when Taker choke slammed him into the table after signing the contract for the Mania match. It was truly awesome. Growing up, I was never a huge Undertaker fan, but I sure do appreciate him now that I’m older. Could this be the last Mania match for the Dead Man? This match has been in the making for the past two years, so I expect this to be the highlight of WrestleMania, just like it was the highlight of Raw.

Overall, it was a great WWE Raw show. I truly expected a ton of old stars to appear to pimp the network, but it did not happen. I expected Vince McMahon to appear, he did not. Instead, what we got was 3 hours of pretty much solid entertainment, story telling, and great wrestling.

WWE Raw gets an A-