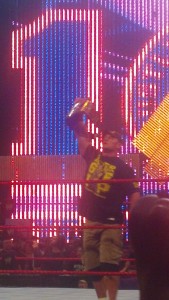 Extreme Rules may have received mixed reactions from several of the wrestling column writers from around the nation, but I, for one, was very impressed with the show. Now, I don’t know how it came across on television, but the action from the fifth row of the Scottrade Center was pretty impressive. To make things clear, I had low expectations going into the pay per view, so that may have also played into my positive review of the show.

Things started off with a quick, solid match on the pre-show, as the Miz defeated Cody Rhodes to retain the Intercontinental Championship. Just quick notes on this match; because it seems as if WWE writers don’t quite know what to do with the Miz. He’s very skilled on the microphone, and has greatly improved in the ring. It would be a shame for them to waste him. I’m not sure how I feel about him as a face, but he could have some solid mid to upper-mid card matches. This is the company’s chance to make the Intercontinental title relevant again. 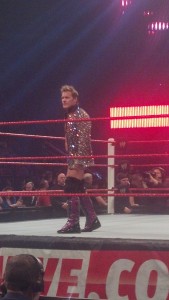 The actual pay per view kicked off with Fandango against Chris Jericho. The crowd was hot for both guys. I was rocking my Fandango shirt, which countless people inquired about through the evening. I also had 5 year-old kid come up to me and tell me Fandango sucked and needed to learn some better dance moves. Nonetheless, both wrestlers delivered a solid opener. Jericho got the win with an impressive code breaker. While, I am not sure why you would have a match with no extreme rules stipulation at Extreme Rules, this will likely lead to another rematch.

The next match was for the the United States Title. As I predicted, Dean Ambrose defeated Kofi Kingston. This match was probably the weakest of all of them. It had a number of botched moves. Ambrose clearly wasn’t on page with Kingston. I would imagine we will see a rematch of this very soon.

The Mark Henry and Sheamus strap match was next. I was probably looking forward to this match least of all. That is really because, Sheamus does nothing for me. Pretty much, everyone in the arena knew he would win, which he did. Both men worked well together in the strap-match, as they were tied together by a leather strap.

Alberto Del Rio and Jack Swagger was probably the most surprising match of the night. It turned out to be a solid match. Swagger’s manager, Zeb Colter cut a pretty serious promo before the match. It grabbed a lot of heat from the audience. It was a very solid job by Colter, in garnering a solid negative reaction from the crowd. The only negative with this match was the constant questioning of the wrestlers by the referee. Every time they were put in a hold, he would ask them if they wanted to quit.  Overall, though, a very solid wrestling match by the men. 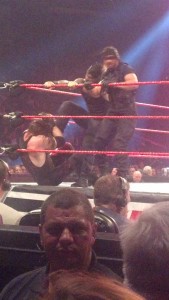 Team Hell No battled The Shield in the next match. It was chaotic, as it was a tornado match. There were some great spots in the match, which can be expected with Daniel Bryan. The Shield got the win on an impressive finisher, as Roman Reigns held Bryan in a torture rack position while Seth Rollins hit him with a flying knee off the top rope. The Shield now owns a lot of gold, as they much-deserved push continues.

The loudest pop of the night came in the next match, as Randy Orton entered the ring to face the big show in an extreme rules match. This was one of the top matches of the night, if not the number one match. Orton played to the crowd, better than he has in months. I’ve been waiting for The Viper to re-appear, and he finally has. I hope he can keep this momentum up and get back into the title picture. Seeing Big Show up close is a mind-blowing thing. The man is absolutely gigantic. Another thing about Orton, the fact that he went to his head-kick to end the match, could signal a heel-turn. That’s really where Orton is at his best. Let’s hope that it happens. 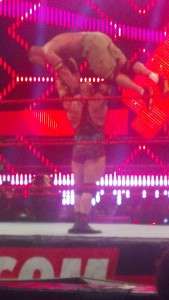 The first main-event of the night was John Cena against Ryback for the WWE title. I had been very critical of this feud leading up to the pay per view, but both men delivered a great match. It went back and forth, as it spilled out into the crowd. The crowd went absolutely insane when Ryback put Cena through part of the stage, sending and explosion of electricity across the stage. It was an awesome and scary sight to see. Both men were played off to be critically hurt, and neither could get to their feet in the last man standing match, so it was a draw. One of the best endings I have seen to a title match in a while. It was brutally violent. The ending also means that both men are protected for another match in the future. It also means that C.M. Punk may not be returning for a while.

The main event was the match I had been looking forward to all night. Triple H against Brock Lesnar ended the show. I was very worried that Triple H was going to get the win, which would not have been the smart thing to do. Having Lesnar win in such a violent way, sledgehammer to the head, was the right way to go. This will build him up as more of an unstoppable monster, while Triple H can go back to his office job, running the company. Seeing Lesnar up close is also very impressive. He is a large man, to say the least. 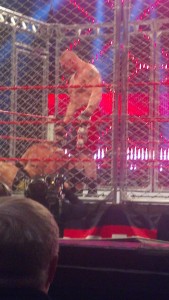 Overall, Extreme Rules was a great pay per view. I spotted Orton’s brother in the section next to me, as well as legendary UFC fighter Matt Hughes in front of him. Hughes seemed to really pay attention to the Lesnar match.

Granted, it may have been different to see in person, but I would give Extreme Rules an 8.5 out of 10.

For more info on Extreme Rules, and for pictures and results, visit WWE.com.