To say the WWE’s booking of Extreme Rules was poor would be an understatement. It seemed like no one cared to watch this pay per view, but in the end I’m pretty sure most wrestling fans were pleasantly surprised. 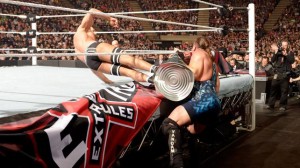 The show kicked off with a triple threat match between RVD, Jack Swagger, and Cesaro. This was a fun match to watch, as all three men worked well together. Cesaro, deservedly came out with the win, but the crowd was hot for RVD, chanting “ECW” throughout the match. I think it’s time to get Cesaro into the title hunt, whether it be the United States, Intercontinental, or Heavyweight title picture, he’s ready.

The Big E and Wade Barrett match was quite fun to watch as well. Both men worked their asses off in the ring, and I think it was pretty suspenseful for a while. Big E looks like he could be a legit mid-card guy. I once had my doubts about him. One thing there is no doubt about is Barrett is way over with the fans. I know that WWE is pushing him as a heel, but it’s not working. The WWE Universe loves his “I have some bad news…” announcements. I think it was a smart move to put the belt on him. I can see him feuding with Big E for another pay per view or two. 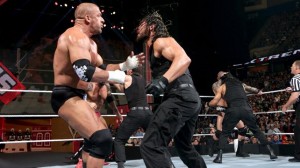 The match of the night belonged to Evolution and The Shield. Many figured this would be the only match worthwhile watching, and it was everything and more. All I can say is holy crap! Seth Rollins had two huge spots, the second being insane. Batista did the job once again to Roman Reigns, giving The Shield the win. This was one of the most physical matches I have seen in the WWE in quite some time. All participants should receive the night off at Raw to recover. This was a 5-star match. This was definitely the match of the year in the WWE, so far.

The match I was most interested to see was the Bray Wyatt vs John Cena match. Would Cena turn heel? No, he did not, but Wyatt once again freaked people out. We got our usual Super Cena, as he dominated Wyatt throughout the match, but Wyatt also got some good spots in as well. The only thing I didn’t like about the match was the amount of involvement of the Wyatt clan. It took away from Bray’s skills. The ending was pretty damn freaky. As Cena started to leave the cage, the lights went out, only to come on with a child singing outside the cage door. Cena looked freaked out and was hit with a Sister Abigail as he backed away. Wyatt hugged the child as he left the cage victorious. The ending of the match really gave off a creepy cult-like vibe. It’s a very interesting angle the WWE is playing with here, given they are PG and child-friendly. I am very curious to see where this goes.

The main event was pretty bland, as I expected. There couldn’t have been a single fan who expected Kane to beat Daniel Bryan. Now, I will say that both men did their best to put on a fun match, but it was just something we had seen before, besides the ending. When Kane lit the table on fire, I’m sure everyone knew he would be the one going through the table, not Bryan. The stunt reminded me of the Attitude Era days, although I thought the guys with the fire extinguishers went a bit overboard spraying Kane down after he went through the table. Nonetheless, it was a pretty cool stunt. As we all expected, Bryan was victorious. Kane sat up in the end and raised hell, as fire shot out of the stage. I’m sure we will see more of Kane terrorizing Bryan.

Overall, a show with pretty low expectations exceeded them quite well. The wrestlers all worked their butts off to put on a great show. Extreme Rules may not have been as extreme as it once was, but it was a fun pay per view and definitely worth the purchase of the network. It looks like the WWE is committed to giving the mid-card wrestlers more of the spotlight, which is good for business. The booking of the pay per view was not good at all, but the show came off way better than anyone could have expected. If the WWE can put together some good booking for future pay per views, there is no doubt that fans will be pleased with the product.

I give Extreme Rules a B+ overall.