Review: ‘The Bridges of Madison County’ – From Spinner Rack to Center Stage

“One of the most romantic stories ever written.” 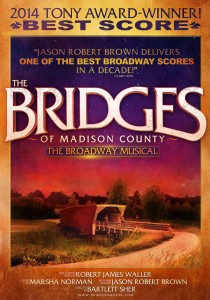 Or so they say. More romantic than Gone With the Wind? Or Romeo and Juliet? How about Pride and Prejudice? Somehow it is hard for me to believe that the story of a married woman who embarks on a four-day affair while her husband and kids are away on a family trip to the fair is one of the most romantic stories ever written. Call me old fashioned.

“Robert, when we were making love last night, you said something that I still remember. I kept whispering to you about your power — and, my God, you have that. You said, ‘I am the highway and a peregrine and all the sails that ever went to sea.’ You were right. That’s what you feel, you feel the road inside of you.”

That is a line from the 1992 best-selling novel by Robert James Waller, upon which the musical is based. If you ask me, it sounds like something out of a book you would find on a dime-store spinner rack. Yet somehow the material transcended far beyond what would be expected of similar writings, masquerading as a sort of Midwestern Anna Karenina. The novel has sold more than 50 million copies since then, becoming a 1995 film directed by (and starring) Clint Eastwood before eventually becoming a Broadway musical in 2014. The production ran for less than three months, for a mere 137 performances before embarking on a national tour in late 2015.

The show opens with Francesca (ELIZABETH STANLEY) singing about her move from Italy to Iowa, as a nervous bride with her soldier from the states 18 years ago (“To Build a Home”). The problem is that it is near impossible to understand what Stanley is singing in her Italian accent she performs for the show. Her speaking voice is quite believable, yet the actress can’t quite seem to hit the right notes while putting on the accent. The opening number, which sets up the story, will leave the audience puzzled if they don’t already know what is going on. It is that difficult to understand. It also doesn’t help that at times it almost appears that she is whispering the lyrics.

Shortly thereafter we are introduced to her husband Bud (CULLEN R. TITMAS) and kids Michael (JOHN CAMPIONE) and Carolyn (CAITLIN HOULAHAN), who are leaving for a few days to compete in a 4-H fair to show off their prized steer. In the first of many performances that I’d refer to as ‘speak-singing,’ Bud explains that they’ll be “Home Before You Know It”. Francesca plans on taking it easy, with no cooking, cleaning, or laundry – just relaxation. But little does she know that fate (or should we call him Cupid) had different plans, and thy name is Robert (ANDREW SAMONSKY). The photographer from National Geographic is on assignment to capture the seven bridges of Madison County, yet is unable to find his final destination. After briefly trying to explain how to get there, Francesca offers to ride with Robert to the last bridge. Their first meeting has all the makings of a cliché-ridden romantic comedy, and from there is obvious where our story is taking us. 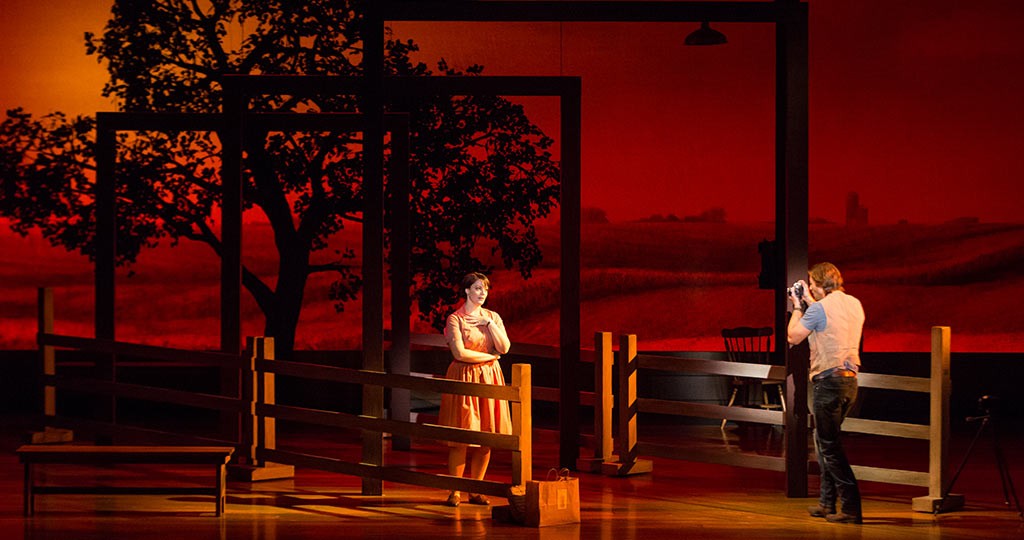 Far too often does the show drag beyond a reasonable pace. It is immediately clear where the story is going, yet it takes forever to get there. This is where the anticipation in such a simple “romance” doesn’t translate effectively to a live performance. By the time things start to really heat up before the close of ACT I, it just feels awkward watching the two leads tiptoe around their obvious feelings for one another. It is clear from the start that Francesca doesn’t feel completely fulfilled with her situation. Yet it doesn’t seem that she is completely unhappy either. She has a husband who doesn’t seem like a bad guy or father, spending time with his children, and clearly caring enough about her to call multiple times per day to say he loves her. And yet she all but throws herself at the long-haired stranger who shows up at her doorstep. 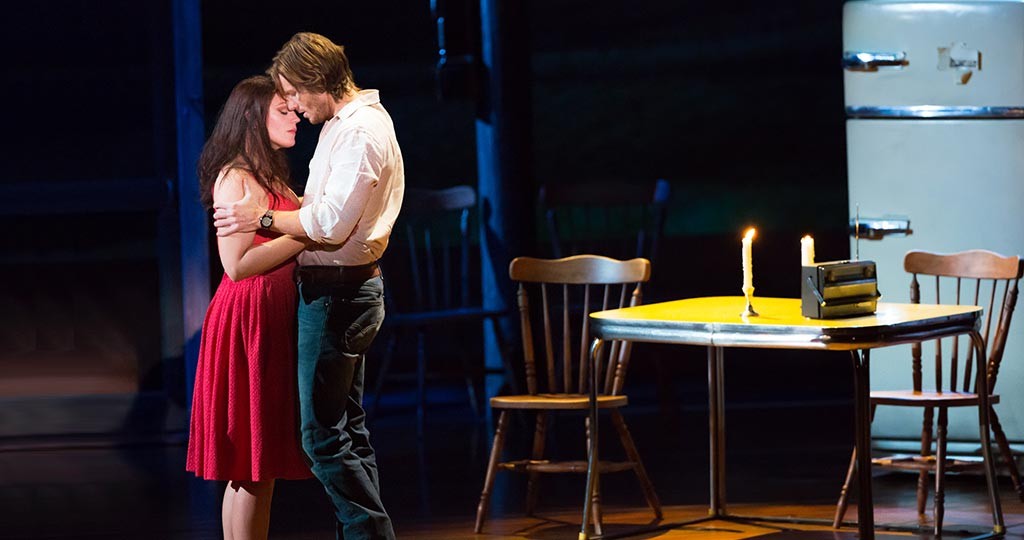 The tone of the musical is so off at times, jumping between Francesca and Robert, then to Bud and the kids, and back again. The show seems schizophrenic when it comes to whether or not it is supposed to be comedic or dramatic. Are we supposed to laugh when Bud calls home to say hi and check in on his wife, interrupting her date night with the hunky photographer? Or when her neighbor Marge (MARY CALLANAN) spies on her and Robert like Gladys Kravitz, and it feels like we are watching the zany hi-jinks of a three camera sitcom? The comedy just ends up feeling awkward, and I don’t understand how the audience is supposed to root for this whirlwind romance (to be fair, the best part of the show is Marge who sings beautifully as the two leads dance in the kitchen). When it’s all said and done, Francesca essentially has to decide whether or not to leave her husband and kids to run away with Robert after a four day romp. The only explanation is that the story is a wish fulfillment for lonely housewives who dream of a man that will pay attention to them. It’s no different than the countless books dawning covers with shirtless hunks with long, flowing hair, riding stallions in front of a sunset. Except this one used contrived writing disguised as profound literature that made it to the top of the charts.

“He was an animal. A graceful, hard, male animal who did nothing overtly to dominate her yet dominated her completely, in the exact way she wanted that to happen at this moment.
― Robert James Waller, The Bridges of Madison County

At times during the show, the sudden changes in intensity between the singing and the music are almost laughable. The show won a Tony Award for best score (JASON ROBERT BROWN) in 2014, for which I have no doubts is musically credible. But add in the lyrics, the attempt at singing to the aforementioned score, and the jarring disconnect between the rhythm and pacing of the vocals – and you wind up with a mess. Some of the lyrics, also written by Brown, are questionable at best. Take the first “moment” between Francesca and Robert while photographing a bridge, as he sings, “Go stand over there… don’t look at me… now, look at me… look at me… there… there… there… there… there.” (“The World Inside a Frame”). The same song has such a jarring uptake in tempo about a minute into it, that I could hear some audience members unable to hold back disappointed laughter. Reading the lyrics, I can see what Brown was going for in moments like this, but the execution was all wrong.

At least in the film adaptation we have Clint Eastwood and Meryl Streep to elevate the material. Even then, Janet Maslin of the New York times wrote in 1995, “Clint Eastwood, director and alchemist, has transformed The Bridges of Madison County into something bearable—no, something even better. Limited by the vapidity of this material while he trims its excesses with the requisite machete, Mr. Eastwood locates a moving, elegiac love story at the heart of Mr. Waller’s self-congratulatory overkill.” 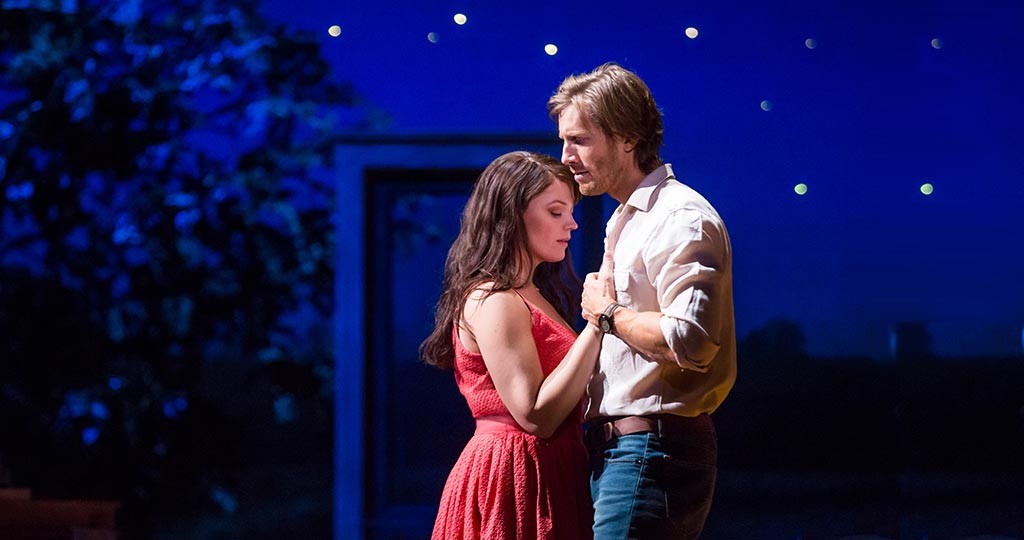 I think that pretty much sums up the source material. It was the “50 Shades of Grey” of almost twenty five years ago; not as dirty, but still capturing the wish fulfillment fantasy of the handsome stranger who allows the main character to reignite her sexuality. In the novel, Francesca tells her children,

“If possible, please sit at the old kitchen table to read [this letter]. You’ll understand that request shortly.”

“In our old kitchen, Robert and I spent hours together. We talked and danced by candlelight. And, yes, we made love there…”

“And, yes, we made love there and in the bedroom and in the pasture grass and just about anywhere else you can think of. It was incredible, powerful, transcending lovemaking, and it went on for days, almost without stopping. I always have used the word “powerful” a lot in thinking about him. For that’s what he had become by the time we met.”

That is one montage I’m glad they didn’t decide attempt to stage.

Between the sometimes awful singing, boring pacing, and terribly misplaced dialogue like, “How did I get here?” “I invited you. Either that, or the patron saint of Iowa housewives sent you,” it is hard to find many positives in The Bridges of Madison County: The Musical. It is the lines like the aforementioned exchange which question what the creatives are trying to do with the tone of the show. How else do they add levity to this adulterous story, and make the audience feel somewhat less awkward as they watch? It is still an unanswered question, as the show appears as confused as the audience seemed.

The story ends with Francesca becoming a martyr, sacrificing her happiness to stay with her husband and children. Never mind talking to your significant other and life partner about your feelings, and what you are going through. Just settle, and regret the decision. In the book she says of the affair, “it never took away from anything I felt for the two of you or your father. Thinking only of myself for a moment, I’m not sure I made the right decision. But taking the family into account, I’m pretty sure I did.” What a valuable lesson this story teaches us (he writes, in the most facetious way possible).

The Bridges of Madison County plays the Fabulous Fox Theatre in St. Louis APRIL 6 – 17! Tickets are $25 to $80, and the running time is 2 hours and 40 minutes with 1 intermission. Purchase tickets at Metrotix, or visit the Fabulous Fox website for more details.