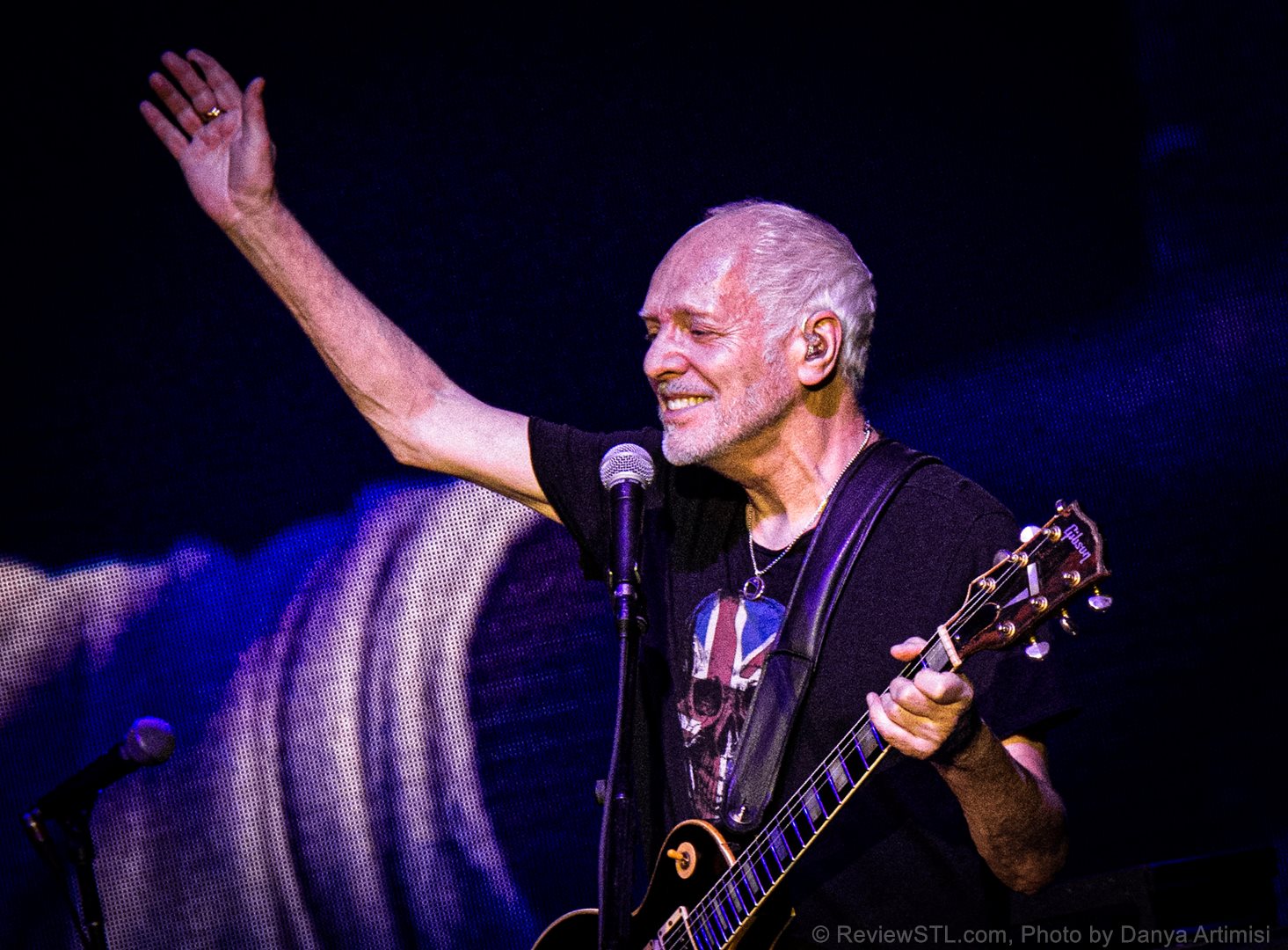 Jason Bonham’s Led Zeppelin Evening opened the show to a full, but too short – in my opinion – set of LZ songs from top to bottom.  Bonham inherited his father’s talent and has been touring with this band for 9 years, in addition to being a member of Sammy Hagar’s band, The Circle.

The lead singer shared a striking resemblance to American Idol Season 5 runner up, Chris Daughtry, but effortlessly channeled Robert Plant.  The set even had security and staff members singing along and trying to very nonchalantly move to the music. It was a rock show, but had all the elements of peace and happiness among the vast crowd.

After a brief break between bands, it was time for our beloved headliner.  Frampton entered stage left and welcomed the crowd warmly with this unmistakeable Frampton smile.  Giving them a wave, thanked them for coming, and went right into Baby (Somethin’s Happening) and Show Me The Way.

The crowd was enthralled with the icon’s presence and performance and were fully engaged from the first struck chord.  Concertgoers sat through most of the show, but as soon as the band broke into his well-known hits, they sprung to their feet and enthusiastically sang along.

The show had a beautiful flow despite storytelling between songs.  The stories were full of nostalgia from memories over the last 40 years and tributes to bandmates who have passed.  Specifically, he shared a deep, heartfelt, yet humorous story about his former drummer, John Siomos for which he bought a green drum kit (identical to John Bonham’s) for Siomos when Frampton soon found out that the drummer listed it on eBay.  Later, he bought the same drum kit again and you can see it on stage right now during his current tour, played by Dan Wojciechowski.

Despite the show being prefaced with the request that fans only use their recording devices for the first three songs, camera screens were ablaze throughout the night.  Perhaps they weren’t aware of Frampton’s history of chucking a fan’s cell phone into the rafters after repeated attempts asking the spectator to refrain from recording. Record at your own risk.

Frampton covered a beautiful rendition of Georgia (On My Mind) and Soundgarden’s Black Hole Sun.  He closed the show with two Humble Pie covers: Four Day Creep and I Don’t Need No Doctor and a very emotional While My Guitar Gently Weeps, with many fans having tears streaming down their faces.

Farewell tours (with the exception of KISS, for obvious reasons) are always a hard pill to swallow.  Especially when it’s an artist who has held a special place in our hearts from what many consider was a simpler time.  For a moment, thousands of people gathered to experience a few hours of peace, music, nostalgia, and escape.

Thank you, Mr. Frampton, for your contributions to not only the music industry and those who you’ve inspired along the way, but for the way that you touched the lives and hearts of millions.  Not to mention all of the babies that were born as a result of backseat conception during Baby I Love Your Way.