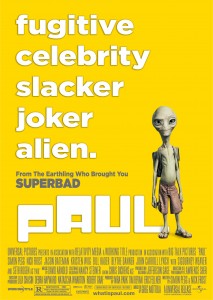 Simon Pegg and Nick Frost have created something of a cottage industry deconstructing American genre films. The two Brits first breakthrough film was 2004’s zombie comedy, Shaun of the Dead. They followed that up with 2007’s action parody, Hot Fuzz. What made both films work so exceedingly well was a palpable affection for their source material even as they skewered genre conventions. This time out the two team up with Seth Rogen in the sci-fi comedy, Paul. Pegg and Frost, who wrote the film, star as unabashed sci-fi geeks on their first trip abroad. They have journeyed across the pond in order to attend that Mecca of nerd-dom: San Diego Comic-Con. Upon leaving Comic-Con they plan to drive across the South West on a tour of famous UFO sighting locations. It’s during this trip that the two encounter Paul, an alien (the space kind) on the run from a secret government agency.

Paul, as voiced by Rogen, is precisely what you’d expect: a pot smoking, fast-talking, laid back hipster with a heart of gold. Thrown into the mix is his love of American film and television that rivals that of our protagonists. At first, this trait appears to be simply an excuse for the filmmakers to wedge pop culture references where they don’t belong. However, Pegg and Frost manage to find a clever way to justify the attribute. But “clever” can be a harsh mistress. If the film has a downfall, it’s that at times it’s more clever than actually funny. Replete with sci-fi references both obvious and obscure, at times the laughs feel more akin to nerdy self-congratulation merely for having been in on the joke. And some of the film’s characters are nothing more than straw-men set up for the sole purpose of knocking them down: Rednecks are dumb; Christians are narrow-minded.

That being said, there are plenty of laughs to be had. Pegg and Frost have a great chemistry and even manage to extend that to the CGI’d Paul. Too often with CGI characters you never quite escape the knowledge that the dialog was recorded in a studio miles away, months later. But here, the three manage to create a sense of camaraderie that is seldom captured in films like this.

The film has an overarching theme (unusual for a comedy) of alienation, both literal and figurative. Pegg and Frost are of this Earth but not of this country and, as geeks, aren’t always the most socially adept. Ironically it is an alien that teaches them the most, not only about American culture but, human nature. It’s this relationship that’s the heart of the film and its saving grace. Even when the film isn’t scoring direct hits with jokes it maintains our interest by making us care about the characters. It’s a talent director Greg Mottola used to great effect in Superbad and it serves him well here. It enables us to truly root for the characters, and emotional investment is rare in a comedy these days.