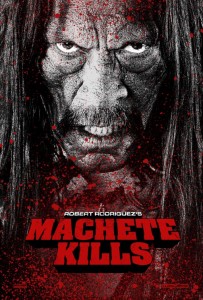 Before you go further in this review, I want make sure that you (as a reader) understand that I love the “Grindhouse” style of movies and all of the other styles of film that derived from it. Machete Kills fits seamlessly into that genre.

As a lover of film and most aspects of filmmaking, I think critics tend to lost sight of why we wanted to get into reviewing movies in the first place.  First and foremost, I want to be entertained.  Whether it’s Captain America punching The Red Skull in the face or it’s Marty McFly trying not to sleep with his mother.  I came to a movie to have a good time.  Now that you understand where I’m coming from, you can understand why I’ve nothing but positive things to say about Machete Kills.

Machete Kills refuses to play by any of the rules.  From the start of the movie, Robert Rodriguez brings us right back into the world he created. We are treated to another fake trailer (one of my favorite things from the original Grindhouse). This time, we see Machete in Space.  Yes you read that right.  For the this fake trailer fans are treated to special appearances from Leo DiCaprio and Justin Bieber.  Given that there are two Machete movies already, a third doesn’t seem that far fetched.

The opening of the flick itself brings the fans back to the American-Mexican boarder where Machete re-teams with Jessica Alba’s character to bring down a military organization selling weapons to a non discript drug lord.  A pretty awesome fight scene ensues with Machete electrocuting one bad guy and using his trade mark blades to split another guy in two.

Following some twists and swerves, our hero is asked to take a meeting at the White House. Why you ask?  Because a Mexican Revolutionist has aimed a nuclear weapon at the United States and only Machete can stop him.  From there we get to see Machete parachuting into Mexico doing what he does best.  Shooting shit and blowing stuff up.  More twists and turns rear their ugly heads. I won’t give to much away.  Spoilers and all.

If you’ve made it this far into the review, you understand that this movie does not take itself to seriously.  It knows exactly what it is and the filmmakers embrace that.  The movie itself get a lot of laughs an that comes from the cast itself.  The President is played by Charlie Sheen (though he’s billed as Carlos Eztevez) Lady Gaga is cast as man eating assassin, and Mel Gibson plays an eccentric billionaire hell bent to turn science fiction into science fact. Gibson takes some shots at himself throughout his time on screen and it’s something that might come off of contrived, but Gibson makes it work.  The flick as also stars Amber Heard as Miss San Antiono.  The beauty queen turned governament handler. The one character that steals the show is the scenery chewing (I say that in a good way) Sophia Vergara as Madame Desdamona, owner of the Desdamona Bordello.  Vergara delivers the most over the top performance I have ever seen.

With all of these ridiculously over the top performances, the movie belongs to Danny Trejo.  He’s just the perfect fit. I think Trejo is a very under rated actor.  Machete doesn’t have a lot of dialogue, but he doesn’t need a lot.  His actions speak louder than words.

The only issue I had with the movie was that it didn’t really know what kind of movie it wanted to be.  Was it an action movie? A buddy cop flick?  Or a Sci-Fi sex flick? The answer is yes, but again, I was having a great time with it and that;s good enough for me.

THE VERDICT IS IN:  Machete Kills is a perfect storm bad taste that entertains those that get what this movie is. It won’t convert critics of the original, and that’s a shame.  Fans of  Grindhouse and the first Machete will have blast with movie.  As well they should.