Review: Korn at The Pageant 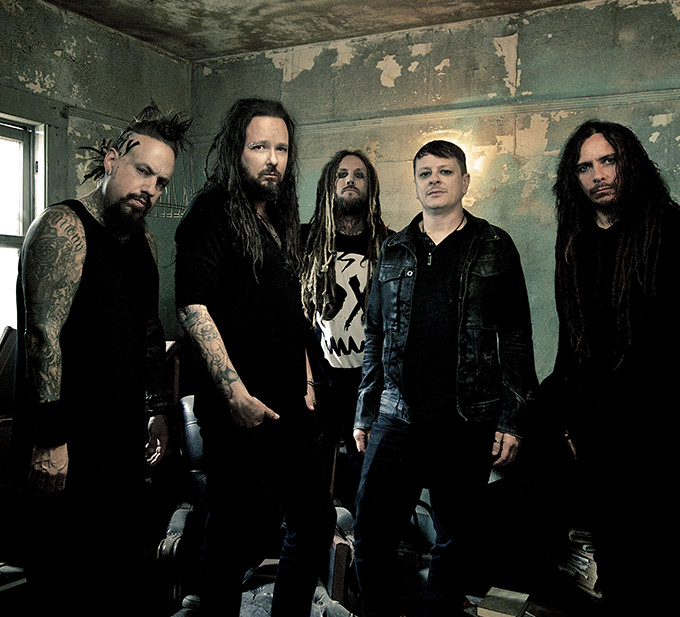 There was somberness driving to The Pageant tonight, most likely due to the recent clashes amongst the community.

Korn performed to a sold out show, despite The Pageant being prime stomping grounds for protestors and police.

There was a lift in the atmosphere approaching The Pageant to see a long line of fans waiting with anticipation in their vintage Korn t-shirts, tattoos, and dark aesthetics. The crowd mostly consisted of a 30+ year old demographic that would have been around when Korn was first establishing themselves as a “Freak on a Leash”, with the head banging long dreads, and defiant sounds in the 90s.

The house was packed elbow to elbow, but still left enough room for concertgoers to throw potential head bangs and rock out signs into the air. The atmosphere was set with a soft purple haze against the theatrical fog rolling up the walls. The opening act was a metal band named Kings Bounty and from the overheard buzz of girls mumbling along to their lyrics in the bathroom, I’ll take away that they have a strong fan base already. The crowd stayed pretty uneventful with just the casual sway to music, until the announcement of Korn to the stage, and everyone made a heavy shift toward the pit.

The stage exploded from darkness to reveal Korn backed by a mind blowing wall to wall installation of LED screens, lights, and lasers, bursting a kaleidoscope of neon florescence into the crowd. The impact of the phenomenal production and the nostalgic heavy roar from frontman Jonathan Davis sent the crowd into a pumped pandemonium. The once sitting balcony section, quickly were on their toes fighting for views and throwing rock out signage into the air.

The lineup of song choice was stacked with precision, altering between new comers like “Rotting in Vain” and transitioned into a cult classic like “Falling away From Me”.

The audience stayed connected the entire show, lip singing, snapping pictures, and chanting lyrics back and forth with Jonathan Davis. The cameras all went up in the air to capture the moment kilted Jonathan Davis made an appearance with the legendary bag pipe piece. It felt like a time warp when the LED screens recreated that scene from their “Freak On a Leash” music video with breaks of light twinkling through wall holes in the background.

The production of this concert created an entire experience for the audience to become completely absorbed and lost in the moments between Korn’s 90s flashbacks and the evolution up to their newest album” Serenity Of Suffering”.

Watching all the members as a gang get down low and sway together in their synchronized famous head bang, was one of the most rockstar moments of the show.  Jonathan Davis’ cryptic growl with his roar from the grave vocals rocked this group into immortals of their generation.

The Pageant allowed St. Louis’ Korn attendees to have an unforgettable night gauging by the sweaty crowd chanting for more. We will have to patiently await for Korn to rock through St. Louis again, but until then, we can all jam out to their newest album “Serenity of Suffering”.