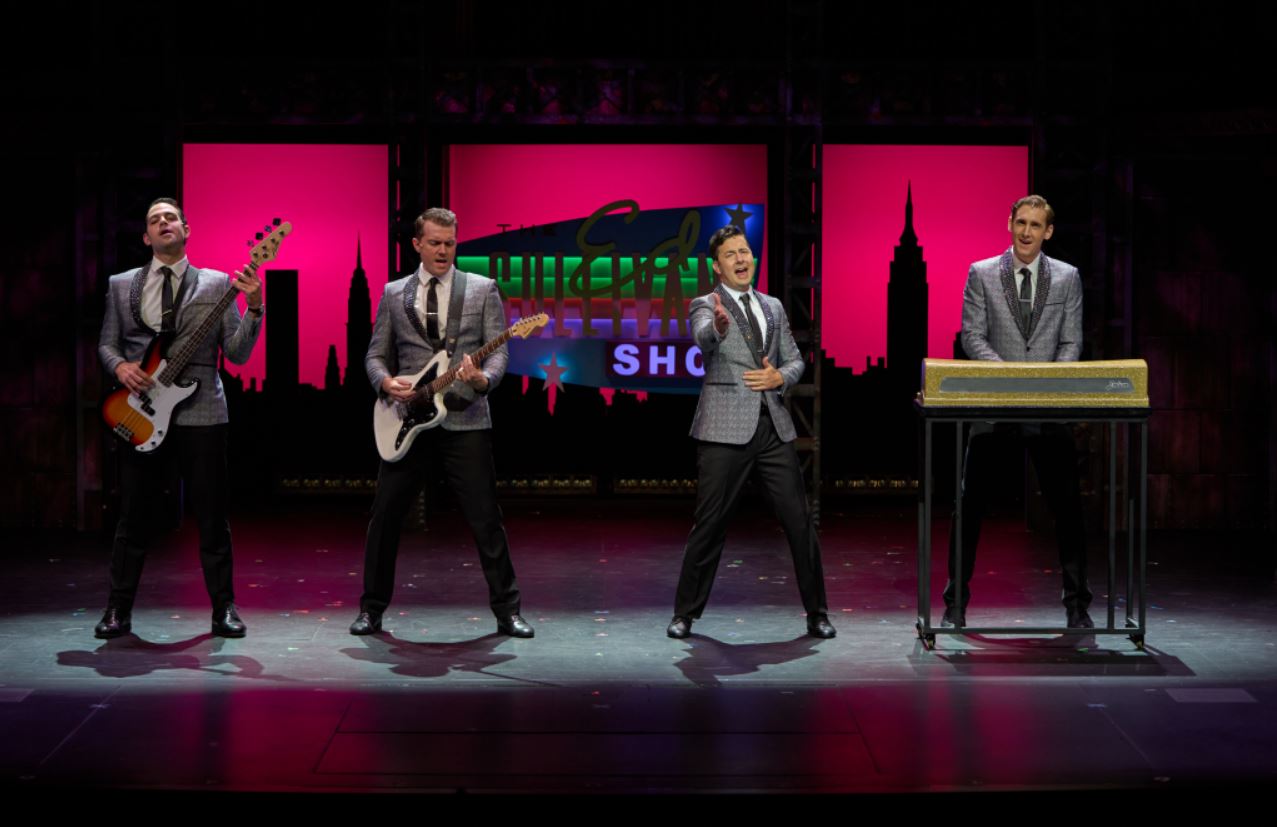 “Oh, what a night!” That’s what audiences leaving the closing show of Stages St. Louis’ 2021 Season will be saying after experiencing one of the most entertaining modern musicals out there. With performances now through October 24 at The Ross Family Theatre at the Kirkwood Performing Arts Center, the music of Frankie Valli and The Four Seasons will have you on your feet by the end of the show.

Jersey Boys chronicles the inception of The Four Seasons, a band that came to prominence in the ’60s and ’70s, eventually entering the Rock and Roll Hall of Fame in 1990. The story begins when teenage Franki (Christopher Kale Jones) meets Tommy DeVito (Brent Michael Diroma) and his bandmate Nick Massi (Jason Michael Evans). Through a series of failed starts, the group eventually allows the talented Bob Gaudio (Ryan Jesse) to join the band, shortly after finding their sound and name. Once they find fame and fortune, it isn’t all smooth sailing – and the group struggles to keep the band together while dealing with the personal struggles of each member.

Christopher Kale Jones, the original Frankie Valli in the 1st National Tour of Jersey Boys, returns to the role he was destined to play. The actor sounds fantastic hitting those high-notes Frankie is so famous for, and has the stamina it takes to belt out dozens of hit songs during each performance. And not only does the role require a strong voice, but also the acting chops to take the audience through this roller-coaster ride of emotions that Frankie has experienced. Jones feels like a natural fit on-stage from start to finish.

In addition to an actor who can sound like Frankie Valli, the second most important component to casting is finding an actor with the charisma and confidence of Tommy DeVito in the show. And DiRoma fits the bill to a T. Tommy sets the tone of the show from the start, and narrates a good amount of the story. The character interjects a lot of humor throughout and is also responsible for much of the group’s journey – for better or for worse. DiRoma has both the comedic timing and acting ability to carry this responsibility – not to mention the voice.

The rest of the cast is terrific, including Evans as the quiet yet important Nick Massi (a character I’ve always found similar to Kevin Smith’s Silent Bob, where when he does speak up it makes an impact) and Ryan Jesse as the talented Bob Gaudio – the missing piece of the puzzle that takes the band to the next level. The four bandmates share great chemistry together, really selling the idea of being a family out on the road together. In addition, Steve Isom has a commanding presence as Gyp DeCarlo, and Edward Juvier is wonderful as the group’s producer Bob Crewe.

Fun fact: Jenna Coker-Jones, who plays Frankie’s first wife in the show, and Christopher Kale Jones are married in real life. The dynamic between the two characters is even more fun to watch knowing that, and they are, of course, great acting off one another. Coker-Jones perfectly conveys the attitude of the older woman who puts a young Frankie in his place. She’s also a heavy-hitter when it comes to the dramatic scenes.

The look and feel of the time period is spot-on, thanks in part to the excellent scenic design by James Wolk and costume designer Brad Musgrove’s gorgeous creations. Also, an undeniable fit is the choreography by Dana Lewis, paired with the talented band – lead by music director Jeremy Jacobs.

Artistic Director Michael Hamilton has staged a marvelous production of the beloved musical, and what a fitting tribute to his contributions to Stages and St. Louis for the past 35 years. Hamilton is retiring on a high note – literally, thanks to the magic of Frankie Valli and The Four Seasons – and it is an amazing sendoff, indeed. Whether you grew up listening to this music or will be introduced to it for the first time – Jersey Boys will have you leaving a fan.