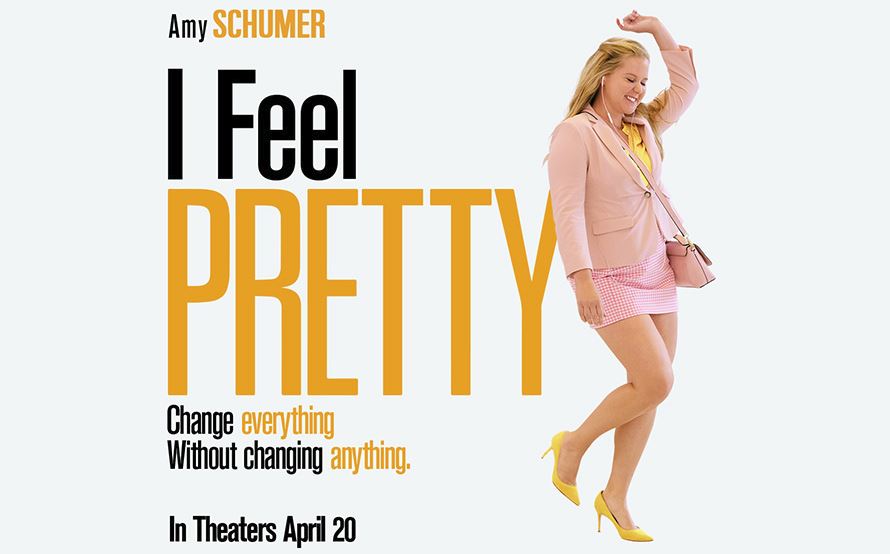 It’s true though. I hadn’t seen any trailers for I Feel Pretty before going into it but already didn’t have high expectations due to the risque, often-vulgar comedienne lead. From the opening sequence though, I was pleasantly surprised how dialed back and vulnerable Schumer appeared on screen.

I Feel Pretty is written and directed by Abby Kohn and Marc Silverstein (the pair who brought us other romantic comedies such as Never Been Kissed and He’s Just Not That Into You) and stars Amy Schumer as Renee Bennett, a good natured girl who’s self-confidence is at a low because she doesn’t feel pretty enough to be noticed. As she’s working through embarrassment  in a local spin class and better herself, an accident happens and a blow to her head causes her to see herself as someone she thinks as beautiful. Because of this, her self confidence is raised to an all time high and we have a new, free-spirited Renee who’s happy in life, though nobody else sees her any differently.

I thought the film might waver off here as it played a little too closely to body-shaming Renee from the reactions of the people around her outside of her friends. Thankfully, it never ventured too far down that path. The film is also wise, however, not to show us how Renee sees herself after the accident (we see her as Schumer the whole time), and it adds another layer for the viewers to appreciate when it comes to the theme of the movie.

It’s inevitable with her new confidence that she meets a guy (Rory Scovel, who’s fantastic) and she works toward bettering her career at Lilly LeClaire, a premiere makeup brand that’s looking for ways to expand. She actually takes a pay cut to transition from the IT department to be a receptionist at headquarters because she believes that’s where she belongs. Of course, the models and other corporate heads find this to be an unusual decision by the granddaughter of Lilly (Lauren Hutton) and heir to the company, Avery (Michelle Williams).

The viewer might be taken aback by Williams’ performance in this film. My friend leaned over to me and validated what we were both thinking after her first scene on screen and that’s that we’ve never seen Williams in a role like this before. She’s a beautiful renowned model and about to inherit the company, but her high pitched, mouse-like voice keeps her confidence in check. She proves that she has what it takes to run the company though because she sees something in Renee that nobody else does because of the way she looks.

The rest of the film is somewhat predictable, but it’s not necessarily a bad thing. You know going into a romantic comedy like this that not everything is going to go according to plan. There are  going to be good decisions and there are going to be bad ones with consequences. What is important though is that the fim is actually quite entertaining throughout. I Feel Pretty is consistently funny even if there are some bumps along the way, but by the film’s end there is an empowering message that shouldn’t be forgotten and Schumer does a surprisingly respectable job delivering it.