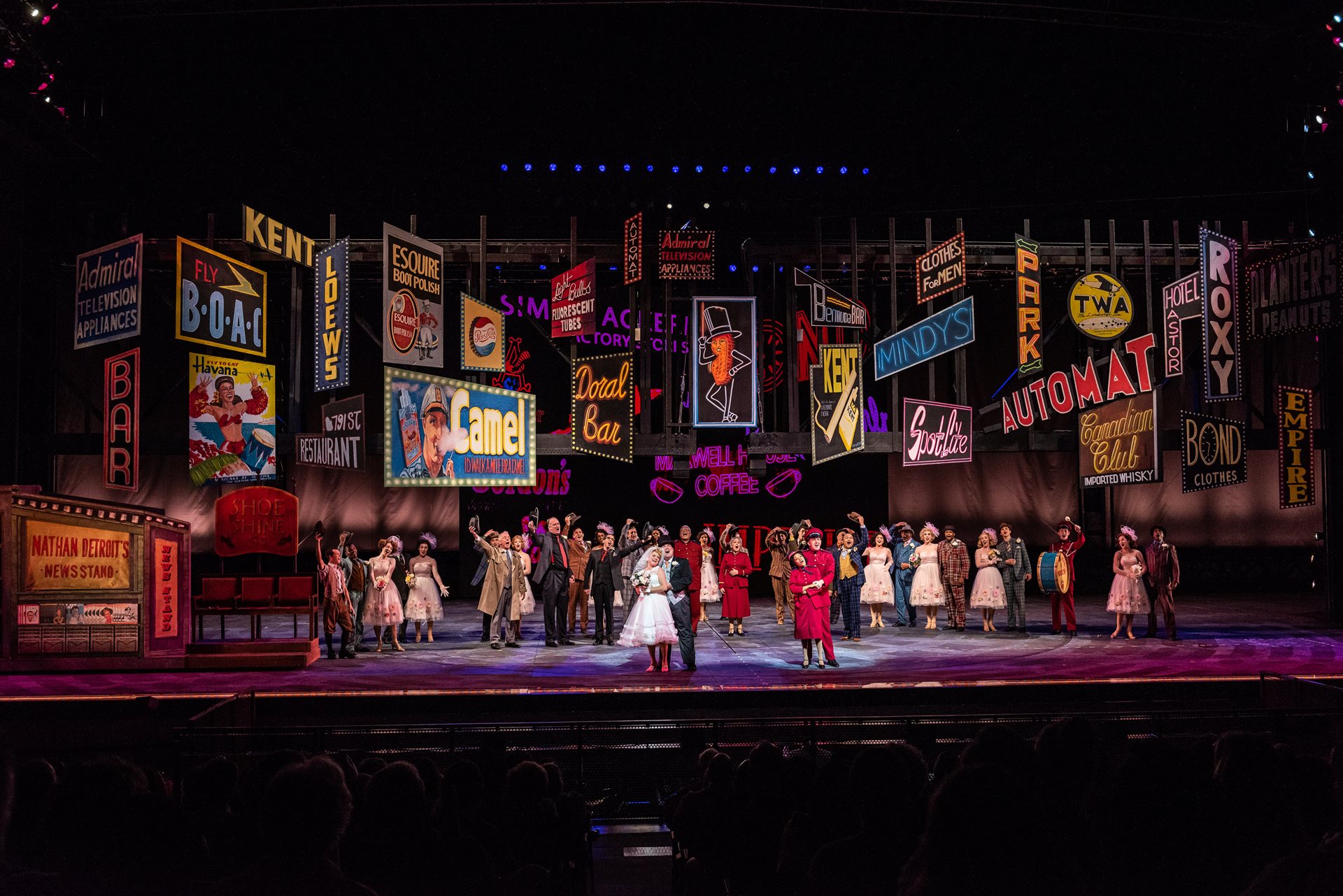 St. Louis could not have asked for a more beautiful evening than what we received for the opening of The Muny’s 101st season.

For Guys and Dolls, the audience got their first look at the beautiful new stage that was built over the past nine months. The sound was clear, the lighting wonderful (designed by Rob Denton), and a fantastic new production of the 1950s classic was the perfect way to show it all off.

Nathan Detroit (Jordan Gelber) is looking for a place to run his craps game, but the heat is on thanks to Lt. Brannigan (Rich Pisarkiewicz) cracking down on illegal gambling. The only place in town to host them is the Biltmore Garage, but that requires a thousand dollars that Detroit doesn’t have. In order to secure the money, he bets a gambler with deep pockets – Sky Masterson (Ben Davis) – that he can’t take missionary Sarah Brown (Brittany Bradford) to dinner in Havana. Meanwhile, he must hide the game from his fiance Adelaide (Kendra Kassebaum) who wants him to finally settle down and leave the world of underground gambling behind. 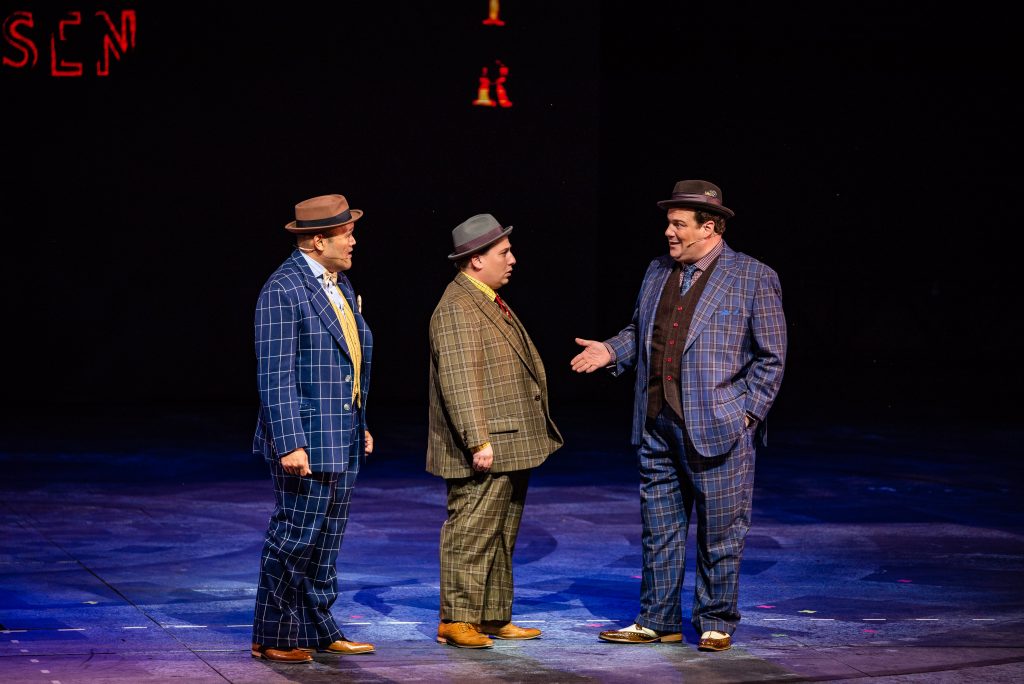 The audience is greeted by the beautiful production design by Paul Tate dePoo III from the moment they arrive at their seats. Broadway marquees and advertisements fill the top of the stage, surrounded by two vibrant video screens at either end of the stage. Nathan W. Scheuer’s designs use the video components efficiently and effectively to help tell the story. And in-between them are exquisite creations that will transport you to a New York City of nearly a century ago.

We’re introduced to Nicely-Nicely Johnson (Orville Mendoza) and Benny Southstreet (Jared Gertner) at the top of the show, two of Nathan Detroit’s flunkeys. Mendoza and Gertner are both excellent in the roles, equipped with exaggerated east coast accents matched only by their comedic timing. Their rendition of “Fague for Tinhorns” was great, and they both truly shine during “Guys and Dolls.”

Gelber lights up the stage as Nathan Detroit, the lovable hustler who is quick on his feet. His character seems to always be under pressure, and the way he delivers his lines met with his body language is wildly entertaining. He delights during “The Old Established” and “Sue Me.” He and the talented Kassebaum have palpable chemistry as their characters fight to get their feelings across to one another. Kassebaum is hilarious as Miss Adelaide, who may have stretched the truth a bit about her and Nathan’s relationship to appease her mother. “Adelaide’s Lament” combines her strong vocals with her comedic sensibilities, while “Take Back Your Mink” with the ensemble is so much fun. 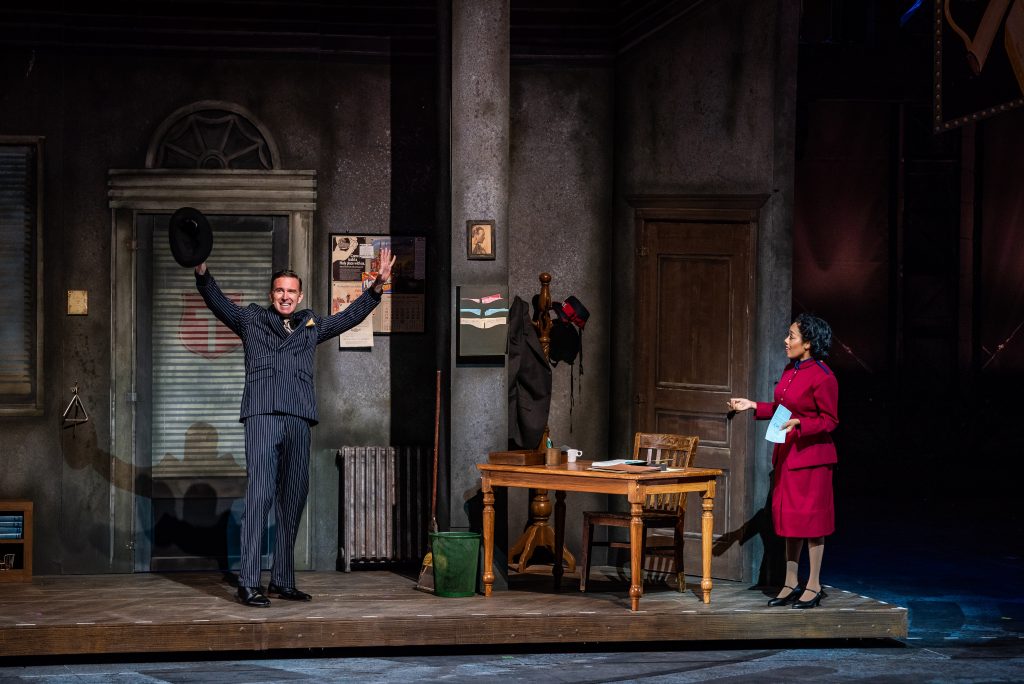 Ben Davis plays a role that is most associated with Marlon Brando in the 1955 film. The actor plays it cool, with all of the charm and charisma you would expect from Sky Masterson. Watching him try to impress Bradford’s character is endlessly entertaining, and Sky gets more than he bargained for when the two of them get to Cuba. Davis does a good job balancing Sky’s love of gambling and wanting to do the right thing, making his character’s motivations seem authentic throughout the show.

Brittany Bradford does a fabulous job of presenting a woman who puts her mission first, and who has no time or patience for the gamblers who plague the city. Where her performance takes flight is during the big Havana dance sequence, which was brilliantly choreographed by Lorin Latarro and Patrick O’Neill. And the aftermath between her and Davis is absolutely compelling. The two actors are another excellent pairing during the show, and their blossoming relationship is a joy to watch from start to finish. “If I Were a Bell” was terrific.

Ken Page plays Abernathy, Sarah’s grandfather who works at the mission with her. It’s always a pleasure watching Page perform, and this is no exception. We are reminded yet again just how much of a treasure he is during “More I Cannot Wish You” in the second act. 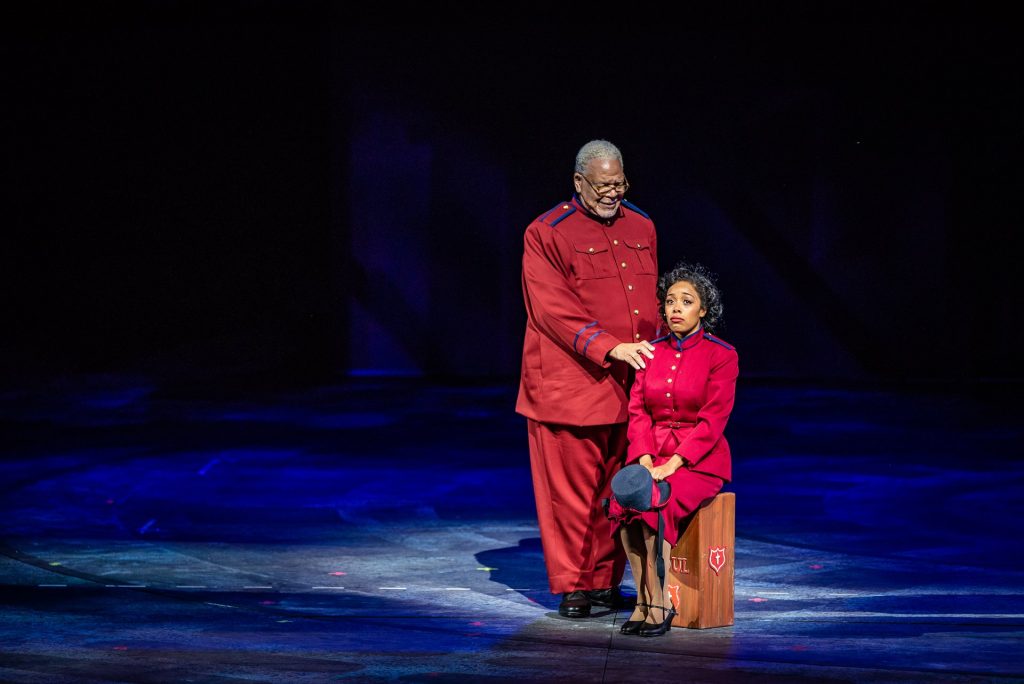 The rest of the supporting cast is so good as well; Zoe Vonder Haar as General Cartwright, Brendan Averett as Big Jule (the Chicago mobster on vacation), and Kevin Cahoon as Harry the Horse. Pisarkiewicz is an intimidating Branningan in his game of cat and mouse with Detroit.

The orchestra, conducted by Brad Haak, sounded lovely all evening playing favorites like “Luck Be a Lady,” and “Sit Down, You’re Rockin’ the Boat” (which featured a surprise appearance by Kennedy Holmes, who placed top 5 on The Voice last year).

Scenery and music alone aren’t enough to take us into the past. The gorgeous costumes designed by Tristan Raines complete the journey. From the mission outfits and old-timey suits to the dazzling costumes of the New York and Havana clubs, the clothing is all breathtaking and authentic to the time period. 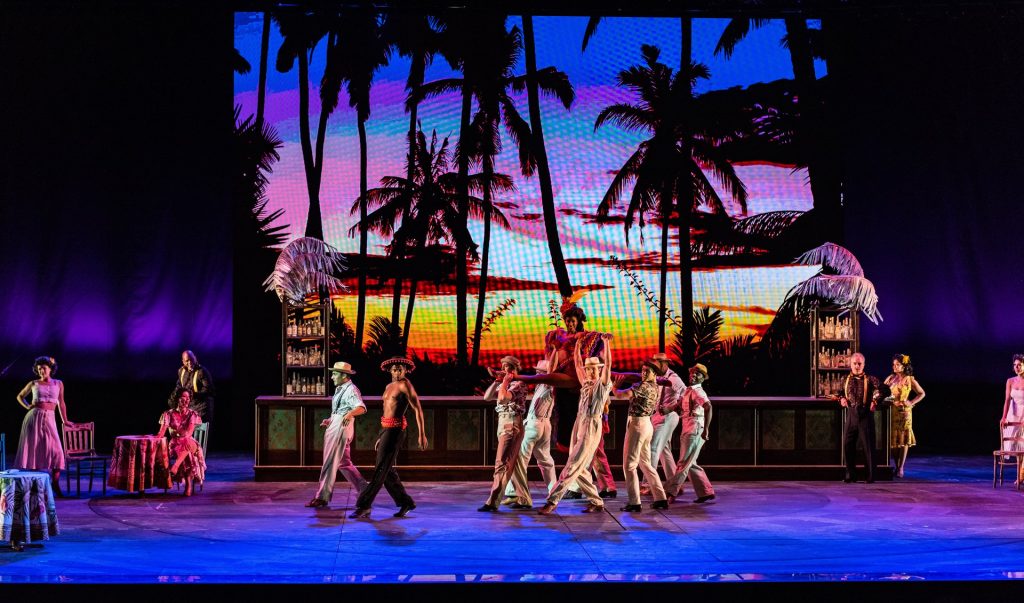 Director Gordon Greenberg does a phenomenal job with this classic musical. The show is nearly 70 years old, but what doesn’t change is the wonderful music and entertaining story. The same speaks to the magic of The Muny, which has been filling the summers of St. Louis audiences for over a century now. Guys and Dolls is a lot of fun – packed with plenty of laughs and excellent performances. It’s a great way to welcome the city to the next hundred years of magic and showcases all of the new upgrades splendidly.

See Guys and Dolls now through June 16 at The Muny. Tickets are available via MetroTix. For more information, visit muny.org.