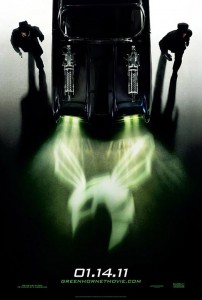 The Green Hornet has come a long way from his initial radio debut in 1936. Considered to be one of the first superheroes, The Green Hornet’s true identity is Britt Reid, son of wealthy newspaper editor, James Reid. Britt finds the Los Angeles nightlife of liquor and women more enticing than his father’s paper and it isn’t until his father’s untimely death that Britt is forced into the spotlight by assuming control of the newspaper and all the pressure and expectations that go along with it. After his father’s death, Britt is introduced to barista extraordinaire Kato who he quickly learns is capable of much more than just brewing up a good cup of joe. Britt and Kato assume the personas of The Green Hornet and “his unnamed sidekick” to team up and fight crime in Los Angeles only to learn that the criminal underbelly of L.A. goes far deeper than either of them could have imagined.

If that last sentence sounds like a story you’ve heard a thousand times before, it’s probably because that’s a story you’ve heard a thousand times before. While the story is not unique by any stretch of the imagination, “The Green Hornet” still manages to feels fresh for a superhero movie, even if it does take a lot of its tone from the “Iron Man” films. Seth Rogen stars as Britt Reid, who like Tony Stark is a tart and witty playboy, unfortunately Seth Rogen has nowhere near the charisma or charm of Robert Downey Jr. Having co-written the movie, Rogen gave himself some pretty funny lines…maybe too many – at times “The Green Hornet” felt more like an action-filled-comedy than a comedy-filled-action (think “Shaun of the Dead” without the zombies).

While neither Britt Reid nor Kato technically have super powers, Kato certainly has a useful ability to analyze a fight and use his martial arts skills to thwart the bad guys. The closest thing to a super power the duo has is Kato’s vehicular creation, The Black Beauty – similarly to the Batmobile, its penchant for destruction is mesmerizing in every scene it’s in (and there are a lot of them).

But for every time “The Green Hornet” gets something right, it also gets something wrong – maybe not “bad” per se, but things it could have done better. One instance is how the film’s main villain, Chudnofsky never really feels threatening. The script takes it time to make several jokes about his name and his “insecurity” as a villain, but never gives us anything to make us feel like he could really harm our protagonists.

Like the film itself, the grab bag of its supporting cast has its bright spots and its disappointments. Cameron Diaz and Edward James Olmos phone it in, while Christopher Waltz (Inglorious Basterds) and Jay Chou (The Curse of the Golden Flower) manage to stand out. Chou is perhaps the brightest spot in this constellation of actors as he is able to find the right balance between comedy and ass-kickery. Chou doesn’t seem to take himself too seriously in this role, but delivers the goods when he needs too.

“The Green Hornet” will likely be a hit as it kicks off yet another year of superhero flicks; however it will probably not be the best of what’s to come. While fans of comedy or action are sure to like this film, fans of Seth Rogen will undoubtedly love it as the recently svelte actor continues to capitalize on his stoner-next-door shtick.

What did you think of the film? Leave your comments below.