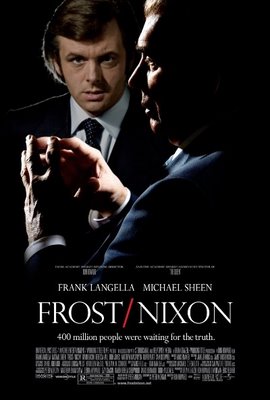 Ron Howards latest is a nice little film about history that does a fine job of humanizing Nixon while still holding him accountable, and is full of a number good performances.
Richard M. Nixon (Frank Langella) is the only president to ever resign from office, and in doing so a nation was cheated and robbed of the man admitting the errors of his way when he was pardoned by Gerald Ford. David Frost (Michael Sheen) in the mean time was a moderately successful British television host who, while having a show fail in the U.S., was still successful in England and Australia. Frost craved a return to the American spotlight though, and a return to the New York scene which he loved. Frost devises a plan to get back to New York by hopefully scoring the first interview with President Nixon since his departure and acting like a real journalist instead of the entertainer he was perceived as. Luckily for Frost, Nixon needs money and a chance to rebuild his reputation, and Nixon and his aides see this interview with an “amateur” as an opportunity to control the situation and put a positive light back on himself and his presidency. After a bit of negotiation, Frost gets his interview, but can only dedicate a small portion of the interview to the Watergate scandal. Regardless, Frost assembles a team of researchers and his producer to gather information and evidence in a hope to pinning the man in a corner and hopefully getting him to spill his guts for all to see; though once the interviews begin, Frost finds that Nixon is a tougher opponent then expected.
The film itself is very well made and is fast paced and never drags. Howard does a fine job of blending in humor, tension, and drama with ease while also getting the most out of an already impressive cast of actors. I will say that Frost’s arc and final push to become the reporter he should be seemed a bit quick and easy, but other then that I have no major complaints with the film. With that said though, something failed to click with me to really fall in love with this film. It has a great cast, great direction, lots of great, but for some reason the film doesn’t elevate itself to the upper echelon of films of the year for me. Another thing that kind of rubbed me the wrong way was the documentary approach to move the story along, it just seemed silly to be interviewing actors playing real people but we were in a setting where they very easily could have just used the real people. It was a weird and just made it terribly clear that we were watching a movie and I think took me out of being fully engrossed in the picture. With that said though, some of the performances really do shine and stand out. 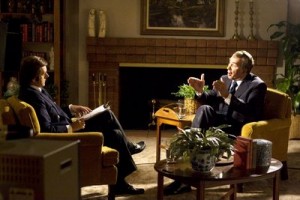 Sam Rockwell is great as always as James Reston, a Nixon scholar of sorts, who is out to pin Nixon to the wall and make him squeal to the American public. Rockwell is a bit overzealous and rides Frost throughout the picture and is the most critical member of the Frost party. Rebecca Hall is also solid, but pales compared to her work in Vicky Cristina Barcelona this year, but she is just a supportive good looking girl on Frost’s arm essentially, and it would have been nice to see a bit more for her to do. Kevin Bacon is also great as the lapdog aide to Nixon who is a bit of an asshole. Inspired by the man who he just as easily gives hope to, Bacon conveys the feelings for those that feel Nixon got a bad rap and stands up for the man through and through. Sheen as Frost is superb; he is a charming and likeable playboy that does just great work at conveying the in over his head mentality Frost finds himself in throughout the film. Sheen also has a great comedic presence and is able to make you laugh while remaining real and believable while just as easily handling all the drama he has to handle as well. Unfortunately for Sheen, Langella does him even one better with his portrayal as Nixon. Capturing the man’s passion for government, his intensity, humor, the strain the lies have on him; Langella shows such magnificent range he is worthy of any and all the praise he is getting for his turn as the former president. 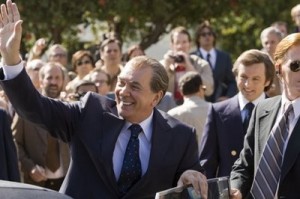 In the end, Frost/Nixon is a solid film that is easily recommended for any fan of history. It also stands up on its own as a great drama and if you don’t know the story or you know the general plot, there is plenty to discover in the film as the pulling off of this monumental interview nearly didn’t happen on a number of occasion for many varied reasons. The film properly catches that dilemma and is filled with great performances throughout, but something just quite didn’t work for me in the end to take it to that top level.
8.5/10