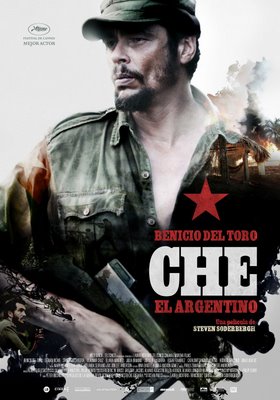 This epic biopic about the Argentinean revolutionary is engaging, informative, and includes a phenomenal portrait and portrayal of this extraordinary individual by Benicio Del Toro.
Che Guevara was a philosophizing Marxist doctor who felt that his Latin American people have been oppressed for too long and that a revolution by the people was the only way to make a change. He got his opportunity to bring his musings to a reality when he met a similar minded man in Fidel Castro and together they organized a military force to head into Cuba with the hope of leading an uprising against the current government that was put in place by a coup d’état. Che, Fidel, and his bother Raul Castro, began organizing, training, and recruiting in the jungles of Cuba and after a time they make their first strike and soon enough a majority of the people of the country are behind their cause. Che’s role in the revolution is that of many, medic, commander, trainer, and dignitary, among others, and his perception among the people of Cuba raises to the level of hero. This is the story of Part One of the film; Part Two examines his attempt to liberate Bolivia and a vastly different experience that he incurred.
Bolivia was another poor and impoverished country that had a bunch of rich government types controlling the country and Che hope to make a difference there like he did in Cuba. Che’s support though was not nearly as large and the road to revolution never really got out on the right foot. And to counter act his efforts, the Bolivian government enlisted the help of the communism scarred U.S. to help flush out and stop Che’s revolution as well as successfully campaigning propaganda to its people, of all economic status, that Che and his movements were not to be trusted which left the revolutionary with an uphill battle that might be impossible to climb. 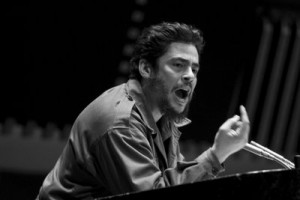 The film, as mentioned, is broken up into two parts with an intermission in-between. Running at four hours and thirty minutes or so the film never bores or feels like it is wasting time. Director Steven Soderbergh crafted a compelling epic that is like a wonderful history lesson about one of the most interesting individuals of the century. The movie looks fantastic with some beautiful shots and a look to the picture that makes you feel like you are right in the mix of the jungle along with Che and his guerrilla armies. The action in the film is also fantastic with the final twenty plus minutes of Part One being devoted to an amazing battle for Santa Clara. The gradual implosion in Bolivia is also fascinating and makes you wonder how Che didn’t ever think about packing it in and getting the hell out of there.
Part One is by far the more re-watchable of the two films and if you look at the film as two separate ones this is the finer of the two as well. This is not to say Part Two is bad though, it’s structure is solid but its tone is grim and one of the few things I would change in the picture is that Part Two makes it’s point very clear early and two hours of it is just hard to watch; though the film is compelling as is through out. I guess that is just the way it was and needed to be told. Part one though is basically a fantastic war film, both parts are war films in fact in the vain of The Thin Red Line, its thrilling, is full of suspense, the action is fantastic when it happens, and it truly captures the guerrilla warfare for what it is. It showcases friendship, love, and the passion for freedom as well as any war film has in years and it is a truly entertaining experience. Part Two is more gloom and doom and while finely crafted, doesn’t hold the same type of re-watchability as its counterpart, but it is a rewarding film none the less. 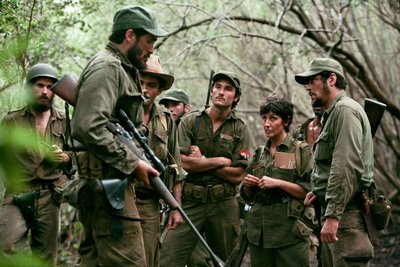 Soderbergh also makes some fantastic choices with the look in that Part One is very bright and vibrant with all the greens popping off the screen, where as Part Two’s more gloomy material is given a dark blue tint, think Traffic, which adds to the mood and atmosphere of the picture. Soderbergh has crafted one of his finest films since Traffic here and he continues to prove that he is one of the finest and most versatile filmmakers of his generation with ease.
Acting wise, the film is full of a number of great performances, starting first and foremost with Del Toro. The man becomes Che, showing tenacity, desire, strength and wisdom through this man that makes you understand why this revolutionary was as inspiring to individuals as he was. Fully committed to the look and physique of the man, his work when he was “asthmatic” was incredible, always leading at the frontlines, Del Toro gives one of the finest performances of his career and the year. Del Toro was also surrounded by an excellent cast, with a number of actors/characters I can’t immediately recall helping to bring this story to life; there wasn’t really a weak link among them. Demian Bichir plays an excellent Fidel Castro and he creates an imposing figure that is guiding everything that is going on in the first film. He also looks just like the guy and that really helps to bring the story even further to life. Catalina Sanfino Moreno also pops up in the later part of Part One and raises the stakes while also breathing new life into Che as a potential love interest as Aledia March. She also does a nice job with the fighting as well as she is smart and believable on the battlefield. The biggest standout of the militants is Santiago Cabrera as a fellow Comandante Camilo Cienfuegos. He is a bit wild, energetic, and enthusiastic, and every time he pops up it brought a smile to my face. Lastly, Franka Potente does an excellent job at bringing some humanity and sadness to Part Two as she plays a spy of sorts that gets separated from Che and his column once the government discovers the resistances training ground. And also a shout out to everyone on the cast and crew that had to deal with all the exterior shooting and jungle stuff, they made everything look great. 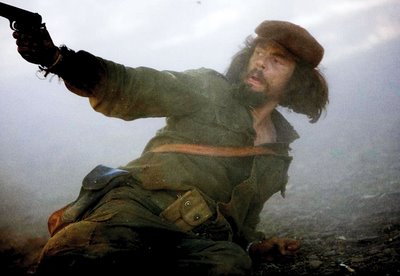 In the end, Che is one of the finer bio-pics in years and is a fantastic look at this engaging individual. Full of history, great performances, and superb film making there is a lot to like in Che. The runtime is a bit of a hurdle for some, but if you can check it out in two part form, don’t miss it. With that said, I think it works great at four plus hours, and I wasn’t bored one minute while watching this great film. Though it is missing something to truly make the overall film an amazing landmark film, it is definitely one of the finest pictures of the year, and Part One will go down as one of the better war films of the decade. I implore you to catch Che in any way shape or form that you can, as you can order on demand I believe right now as well, and you will be treated to an amazing portrait of an amazing individual.
9/10