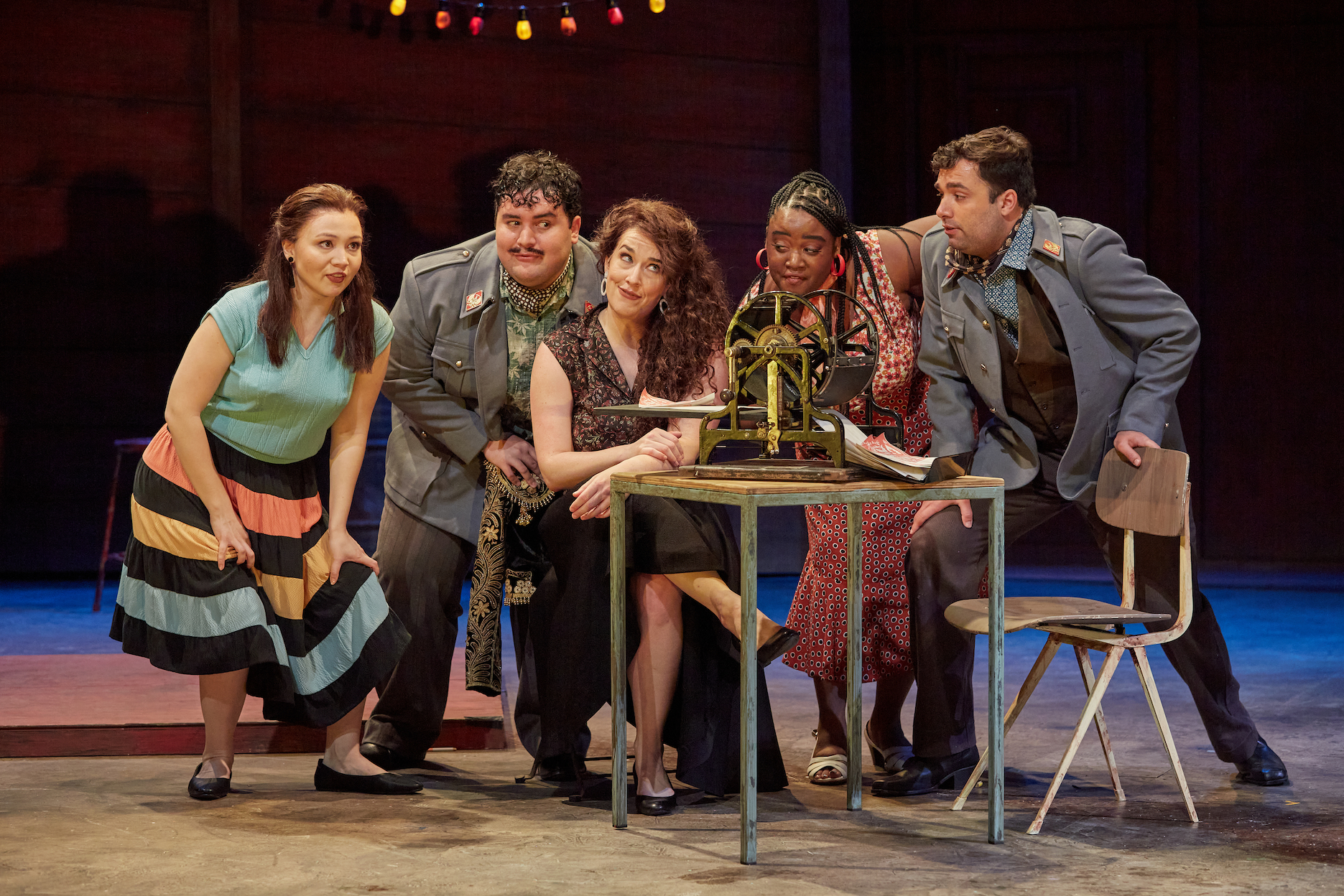 Bullfighting and bravado take center stage for Opera Theatre of St. Louis’ feisty production of Carmen. Set in Franco’s Spain, Rodula Gaitanou’s battle of the sexes takes a little time to get going. But, once it does, the production kicks into overdrive.

Opening the company’s 48th season, Gaitanou’s interpretation breaks away from the trendy projections that have run rampant in theater and opera in recent years in favor of a minimalist set, and more subdued colors. As a result, Bizet’s story of seduction, lust, and betrayal is allowed to breathe fresh air.

Unlike previous versions of Carmen staged by OTSL, this one is a more contemporary celebration of one woman’s intoxicating spirit and raw sexuality. Gaitanou has also underscored Bizet’s themes of race, class, and gender without capsizing the production’s uptempo pacing.

Presented here as a motorcycle mama with a “take no prisoners” outlook, Carmen is a force of nature. Used to getting whatever, and whomever, she wants, she is a firebrand of passion whose robust personality and insatiable appetite leave a trail of broken hearts and poor decisions.

At the local factory, town square, or Lillas Pastia’s, a nightclub where local soldiers, factory workers, and village women let their hair down, Carmen is the center of attention. Each of these settings finds her on the make, enticing potential suitors.

Drawn to her overt sexuality but scared by her independence, intelligence and confidence, the locals cautiously fawn over her with jealousy and adoration. One of those who become entangled in her web is the seemingly devoted Don José, A corporal whose military bearing is matched by his devotion to his mother.

Initially turned off by Carmen’s brash antics, Don José, quickly succumbs to her charms. Ensnared in a passionate affair, Don José loses all rationality as he sacrifices his reputation, career, and family ready for Carmen.

Falling fast, he crashes hard after he is jilted by the fickle Carmen in favor of Escamillo, a handsome bullfighter whose sense of self and passion for life rivals Carmen’s. Having given up his entire world for the woman he loves, Don José is ruined.

From here things spiral out of control. Carmen is in a heady romance with a man who faces death every time he enters the ring. Meanwhile, her lover, Escamillo, becomes a creature of fame whose arrogance and self-assurance make him larger than life. Driven to the brink by obsession and poisoned by envy, the once-proud Don José loses his nerve. Wallowing in his desire and passion, he is determined to win back Carmen at any cost.

The opera’s second half reaches a turbulent crescendo as the passions of these three characters collide in a gripping and fatal conclusion.

Watching Sarah Mesko’s Carmen tear down the system at every turn is a sheer delight. Her powerful performance anchors an entirely fresh production, giving it polish, sparkle, and plenty of sass.

English tenor Adam Smith’s OTSL debut is a sterling success. His performance as the tragic Don José is riddled with a wide range of emotions. Capturing the fragility and desperation of a man gone mad by desire, Smith perfectly balances lovestruck bliss with lovelorn obsession.

Also debuting with OTSL is the dynamic Christian Pursell as Escamillo. In his care, Bizet’s one-dimensional bullfighter becomes something richer, and more textured. Simply fantastic with Mesko, Pursell’s panache, charm, and cool demeanor serve as the perfect foil for Carmen, a woman who is the life of every party. The rest of the ensemble is superb, especially Yunuet Laguna as the tragic Micaëla.

One of the most popular scores of all time, Bizet’s score is still magical. Using musical composition to evoke the feelings of his characters and the atmosphere onstage, it represents a watershed moment in 19th-century musical composition.

This energetic version of Carmen features Daniela Candillari, OTSL’s new Principal Conductor. Her inaugural effort with the company is not an easy one. Bizet filled his work with big crescendos and sweeping rhythms that thanks to movies, tv adverts and digital music is just as familiar to ears today as when it premiered.

Candillari is a vigorous conductor. Joined by members of the St. Louis Symphony Orchestra, her turn at the most recognizable score in opera is bombastic, powerful, and breathtaking.

Relentless, fervid, and filled with great performances, OTSL’s Carmen is an exuberant return to their home base filled with energy, passion, and emotion.

Carmen runs through June 25th at the Loretto-Hilton Center on the campus of Webster University. Productions at Opera Theatre St. Louis are in English with musical accompaniment from The St. Louis Symphony Orchestra. For more information on programming or the 2020 season, visit opera-stl.org.