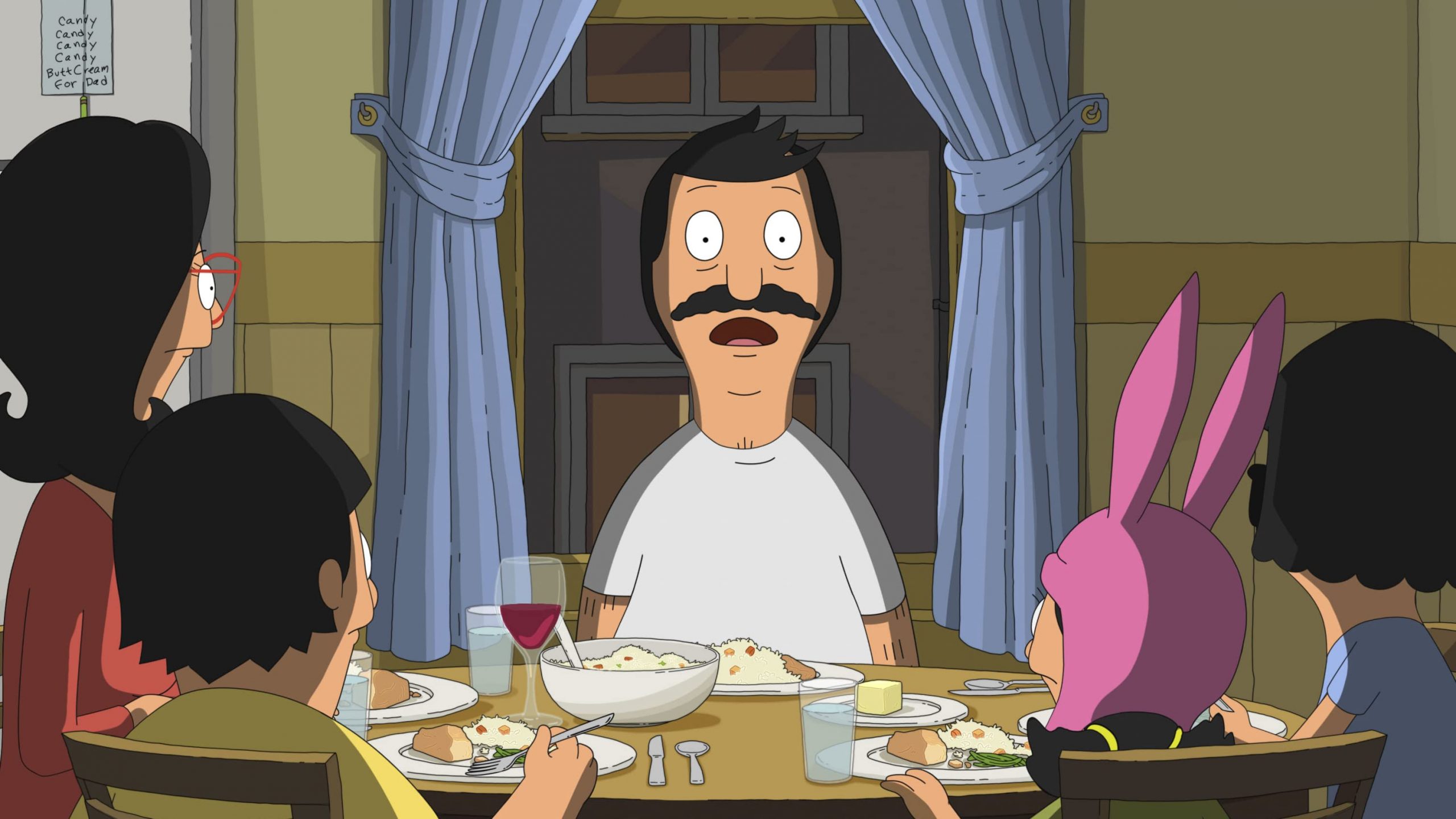 Following in the footsteps of TV shows turned movies like The Simpsons Movie and South Park: Bigger, Longer & Uncut, fans now have a big screen version of Bob’s Burgers.

The film starts off with a murder that takes place six years earlier at the wharf across from the restaurant. In present day, Bob (H. Jon Benjamin) is stressing about making the perfect burger to bring to his loan officer in hopes that it will earn him an extension for his struggling restaurant, while his wife Linda (John Roberts) assures him it will all work out. Meanwhile, their kids have their own worries, as Tina (Dan Mintz) wants to ask Jimmy Jr. to be her boyfriend, Gene (Eugene Mirman) is trying to become a rock star by making an instrument out of a napkin holder, and Louise (Kristen Schaal) is self-conscious about her trademark bunny hat after being called a baby by a girl at school. All of this leads to a summer of uncertainty, when a water main bursts in front of the restaurant, leaving a huge pit that blocks the entrance.

In order to prove she’s not a baby, Louise climbs into the hole while her brother and sister film it, but what she finds are the remains of the victim from the beginning of the film. The police eventually arrest their landlord, Calvin Fischoeder (Kevin Klein), but the kids set off on a mission to clear his name while their parents try to save their business.

I’ve only seen a few episodes of the show here and there, so I’m essentially coming at this review as a newcomer – which can be an interesting perspective. There are two main questions people want to know about a big screen adaptation like this: will fans enjoy it, and will it make new fans?

The good news is that fans of the series seem to be loving the film. At the screening where I watched it, I overheard several excited viewers saying how much they enjoyed seeing one of their favorite shows on the big screen. My son Ryan is one of them, who has seen all the episodes and had a great time with the movie. If anyone should enjoy it, it’s the fans – so that is great to hear.

Now for the unfortunate news – this movie probably isn’t going to make many newcomers anxious to rush out and binge the series. It’s not that it isn’t entertaining – I had a fun time with the movie, and laughed here and there. But overall, it felt like an episode of the show that was stretched far too thin to be a feature. The story could have worked as a two-parter, but just didn’t have enough to keep my interest for an hour and forty-two minutes. Without hunting for Easter eggs or picking up on homages to the series, the film was testing my patience by the end.

The movie is also somewhat of a musical, which I understand is not a regular part of the show. This reminds me of what South Park did with their aforementioned film, which worked well for them. However, the songs in The Bob’s Burgers Movie (written by co-director Lorne Bouchard and writer Nora Smith) aren’t very funny. That isn’t to say they aren’t catchy, thanks to composer Tim Davies’ work (I found some of the tunes stuck in my head for weeks after seeing the movie), but I couldn’t tell you hardly any of the lyrics. The musical numbers were dull, and I didn’t find myself laughing at any of what they had to say. It felt like the characters were just talking about what we already knew they felt or were going through, and didn’t provide any insightful thoughts or even comedic commentary on the plot.

The film also stars Zach Galifianakis as Felix Fischoeder, Calvin’s brother, and David Wain as Grover Fischoeder, their cousin and lawyer. All of the voice actors do a fine job, I just wish they had better material to work with. Although I am a fan of The Simpsons, I could see how their movie was funny and clever enough to work on its own. The same goes for South Park, I could see either of those making new fans of their series. In the case of Bob’s Burgers, it feels more like they took a couple of episodes of the show and stretched them out to feature-length without much more effort.

The animation is polished for theaters, with more contrast and a cinematic feel. And there are some fun visual gags that took advantage of the upgraded look. But they are few and far between, and ultimately forgettable.

In the end, fans of Bob’s Burgers are sure to enjoy their outing to the theater to see the characters they love on the big screen. I wish the movie would have been funnier, and interesting enough to pull me in and make me want to seek out the show. I’m still not opposed to watching it, as I think some talented people are involved and it can be really funny. But there are hundreds of episodes I can stream on Hulu for that, and no need to visit the theater to watch them.