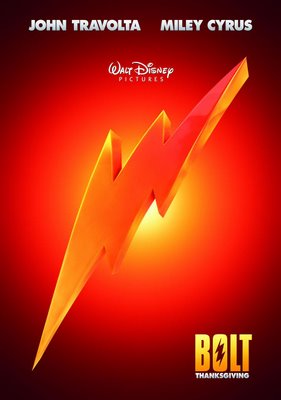 Disney Animation’s latest venture into the computer animation foray is a run of the mill, but decent adventure that doesn’t have the depth or story to really suck you in.
Bolt is an actor, Bolt is also a dog, and he is star of the biggest action show on television today. The reason Bolt is so good is because he believes everything to be real in the TV world he works in everyday. The producers go through painstaking pain to make sure everything feels authentic, from creating super barks, laser eyes, and fighting enemies, Bolt believes he is capable of all of these things. So when they end an episode of the show with Penny being kidnapped, Bolt believes it too be real, and is determined to get out and save his owner Penny. He is bent on tracking down the green eyed man who has cat’s on his side, and upon accidentally ending up in NYC in the real world, Bolt takes captive a helpless alley cat, suspecting ties to the green eyed man, to lead him back to Penny so he can rescue her. Once the two set out, they head across country on a trip that brings them many perils and friends (a hamster who believes in Bolt) as Bolt comes to grips to what he really is on his journey home.
The plot for the film is terribly simple and very predictable and this is the last release to originate from the mediocre Disney Animation studios before Pixar’s John Lasseter took the reigns of the studio. Lasseter had a hand at bringing this picture to its final state, as this project has a long and turbulent history from a traditional 2-D film, called American Dog, the director was fired, and the animation was turned to 3-D as the old regime at the studio declared the 2-D art form dead. Luckily Lasseter immediately corrected this gross error, but Bolt was too far along into production to revert to its roots or original director. Regardless, Bolt isn’t bad by any means, but it pails to the quality of Kung Fu Panda and Wall-e of 08. The film is also unbelievably ridiculous at times as well, and while you might say Ratatouille or Toy Story is just as absurd, films a mythology, fantasy, and wonder in there pictures that makes them work, where this film takes place in essentially the real world where dogs and cats can navigate across the country through hitchhiking and reading a waffle restaurant chain franchise map of the country. 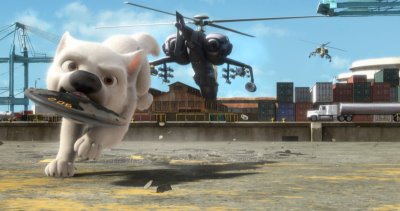 Outside of that the film is also just oddly structured in that the first 15-20 min is a part of an episode of Bolt, the TV show, and has no consequence on anything to the plot of the film outside being a fun action set piece as well as selling us on that Bolt thinks it is all real. But the heart of the story, which is supposed to be this road trip to discovery, also just comes across as mashed together from scene to scene; the film has no flow. The film does have some nice action though in the opening and a couple of winning moments of humor, but you never feel the characters are never at risk at getting what they strive for and the story hits every stereotypical note along the way. When seeing what fresh storytelling some of the other guys are capable of pulling off nowadays, its just saddening that Disney Animation continues to play it safe and sound ever since there heyday in the early 90’s with no film becoming anywhere near being a classic in years from the studio’s animation front.
Though, like I have touched on, the film isn’t all disappointment. The hamster character, Rhino, is pretty fun and has a number of good laughs throughout; though the bozo sidekick feels a bit stale as well. The cat along for the ride, Mittens, is about as original as the name and her arc is all too predictable as is her relationship with Bolt. Bolt has the most depth and the film gets a good bit of humor out of his characters confusion over his predicament, and while his role won’t surprise you in the end, the film manages to make the moment feel earned and genuine in the end. And while discussing characters, the pigeons didn’t hit home like the filmmakers thought they would I think; they just seem too forced and unimportant, simply there for a gag. 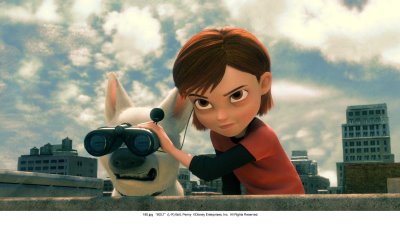 In the end, Bolt is a mediocre story, with great visuals, but too stale a story to really grab any real interest. The film is to stereotypical and doesn’t feel fresh or new in anyways shape or form. A couple of decent laughs along the way keep things interesting, but the films implausibility really becomes an issue as the filmmakers fail to really create a reason for this to be all possible. With all this said, the movie still was entertaining and worth watching once, and I imagine this hits home better with the kids then the adults, but I won’t be rushing back to check this one out anytime soon; it looked fairly pretty though if that is a consolation.
6.5/10