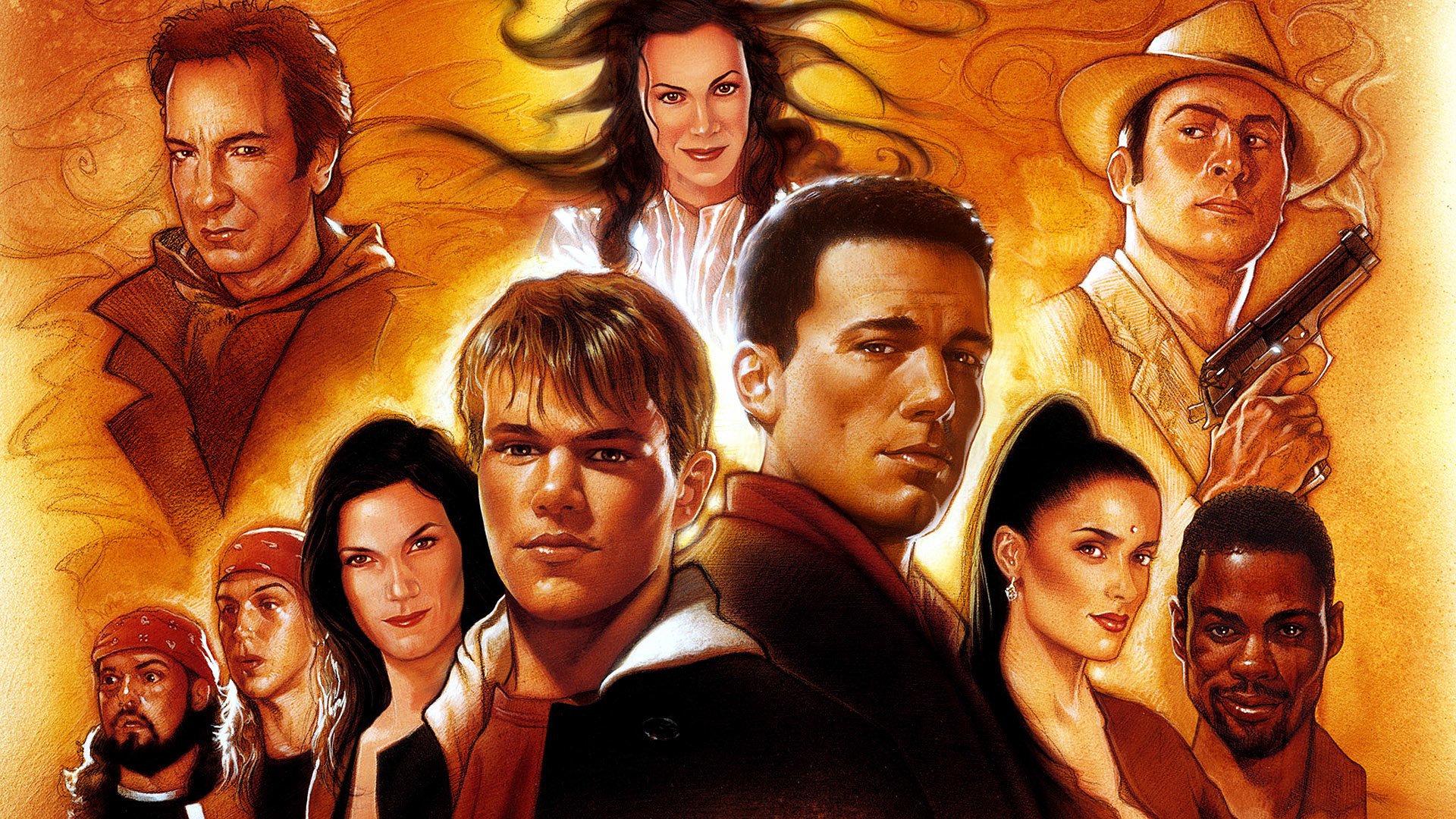 21 years ago, St. Louis had a football team, I had a head full of hair and sagging was cool. 21 years later, my hair is gone and now the in-style is wearing pants so tight it shows off your camel toe. Yeah, I wish some things hadn’t changed.

In 1999, Kevin Smith was on his fourth film, Dogma, which if you ask me, is arguably his finest piece of work.

It’s pretty easy to find Smith’s three previous films on Blu-ray or DVD, but Dogma has quietly disappeared. Finding it is a chore and if you do, it’s not cheap. Maybe it’s the Archdiocese’s way of trying to censor what we watch, maybe it’s because the film was a Weinstein production, who the hell knows. All I know is Dogma is really, really, fucking great!

While Chasing Amy is arguably his most well-received film and one of Ben Affleck’s best performances, Dogma was certainly his most ambitious piece of work. He had a star-studded cast with Affleck, Damon, Chris Rock, Alan Rickman, and the beloved George Carlin. Throw in Jay and Silent Bob and Dogma is an all-out assault on all that is holy. We not only get the iconic Buddy Christ, but we also get the truly-unforgettable Poop Monster.

At the time of its release in 1999, Dogma was deeply controversial. Catholics picketed the film. I can remember seeing people picketing Ronnies Theater. I mean, I don’t blame them for picketing, the main character Bethany, played by Linda Fiorentino, works at an abortion clinic. To me that’s funny, but to some, it straight up pissed them off. Smith was known for his raunchy comedic humor, so a film about Catholicism was no doubt a stretch.

Carlin plays a Cardinal who is seeking to change Catholicism’s guilt-driven and dark stigma, so he retires the crucifix and creates a statue of Jesus giving the thumbs up. Yep, that really pissed off some people, but also made many more people laugh. Dogma is loaded with sexual references and content F-bombs. I mean, this is a Jay and Silent Bob movie after all.

The Cardinal seeks to change Catholicism’s dark and guilt-tinged persona to something poppier, so he “retires” the crucifix and creates a statue of Jesus giving a thumbs-up, called The Buddy Christ. The film is full of F-bombs and sexual jokes. This film won’t be shown at church camp.

What the critics of this film didn’t expect was for Smith to take the religious aspect so seriously. Once you get past the poop monsters and demons who carry hockey sticks, it’s clear that Smith is frustrated with the Catholic church’s failure to meet the needs of modern culture.

In between all the dick and fart jokes, there are long discussions about faith and spirituality. Smith is clearly knowledgeable about the Catholic religion, and it shows in the film.

While Smith will never win an Oscar for his acting, his writing is where his films usually excel. Dogma’s screenplay is one of his best. Affleck’s scene involving free will that’s given to humans and Bethany’s struggles with faith are very real and heavy.

Dogma is undoubtedly Smith’s most ambitious project and many of his fans, including myself, wish he would go back to this type of film. His talent is undeniable and he’s at his best when he tackles those uncomfortable topics. So, if you’re looking for a great flick while at home during this pandemic, this guy strongly recommends Dogma.