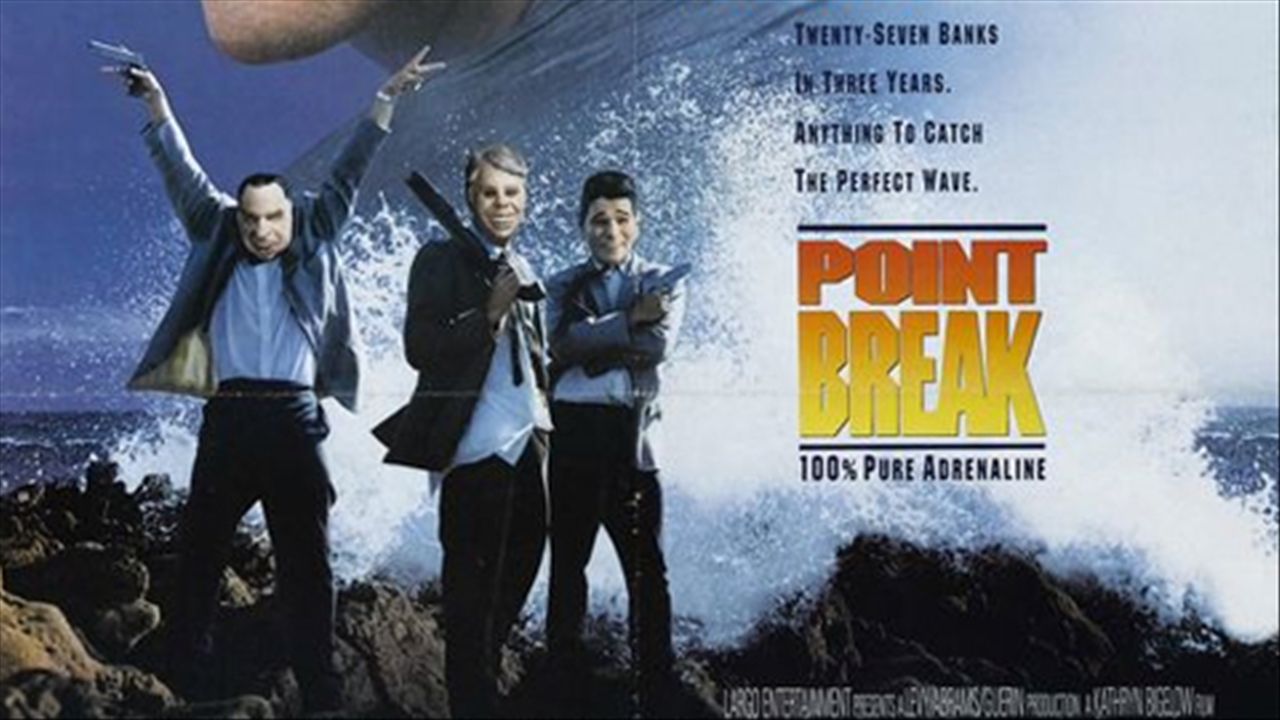 Directed by Kathryn Bigelow, who also helmed such films at ‘The Hurt Locker,’ ‘Blue Steel,’ and ‘Strange Days,’ this film is an all out adrenaline rush.

Now, I will be the first to say that I have probably watched this film atleast 100 times in my lifetime. I absolutely love it. I mean who wouldn’t love a film about surfing bank robbers who dress up like former presidents.

Forget about the shitty remake a few years ago. That film was absolute garbage and it was a disgrace to the original. I know that Keanu Reeves may not have turned in the finest acting job for the film, but it was his first real leading action role. Swayze was at the height of his popularity and for the ladies, there are plenty of shirtless scenes. We also get a cameo from Anthony Keidis, frontman of the Red Hot Chili Peppers.

Reeves sports the perfect name for a bro-action film, Johnny Utah, a former college quarterback turned FBI agent. I know it’s far-fetched, but who cares, this film is totally bad ass. Utah is teamed with Special Agent Pappas, played by Gary Busey. Pappas has believed all along that the string of bank robberies were being done by surfers, but no one will believe him except for Utah. Utah eventually befriends a group of surfers who are led by Bodhi, played by Swayze. Bodhi believes surfing is a spiritual outlet and frequently pushes the line between extreme and flat out dangerous. In fact, many look at ‘Point Break’ as the film that gave birth to Extreme Sports.

While undercover, Utah meets Tyler, played by Lori Petty. The two get freaky on the beach, because where else would they decide to do it. I have to imagine the sand caused some issues in weird places. While the group accepts Utah as one of their own, Bodhi soon learns that Utah is an undercover agent. This is where Bigelow shines, as the two embark on a foot chase through alleyways, living rooms and backyards. It’s one of the best chases in any action film.

Along with the brilliantly filmed foot chase, Bigelow excels at the skydiving scenes. While Point Break may not feature the finest acting, it makes up for that with the beautifully shot, adrenaline-filled action scenes.

From start to finish, Point Break is pure adrenaline. Reeves and Swayze have great chemistry together and truly carry the film. The final battle between the two is damn near perfect. While Utah must do his job and stop Bodhi, the two also share a bond for pushing themselves to a breaking point. While the movie world sadly lost Swayze to cancer years later, Reeves has went on to become one of Hollywood’s most bankable action stars with The Matrix, Speed, and now John Wick.

Point Break gets an A-.