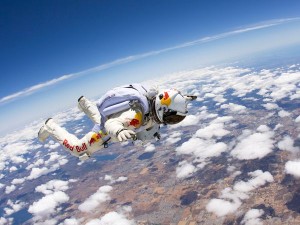 You want to go skydiving? How about a 23 mile free fall? Doesn’t sound that entertaining to you? Luckily Red Bull and skydiver Felix Baumgartner have the stunt covered for you.  Unfortunately, the dive has been aborted until tomorrow due to weather conditions.

The dive which was planned for early Tuesday morning, was postponed due to high winds in New Mexico that could turn the dangerous dive into an exponentially more dangerous stunt. The launch is apparently one of the most dangerous parts of the stunt, and the gusts of winds could have a huge effect on the launch of the balloon that would take Baumgartner up 23 miles.

The stunt would put the 43-year-old Baumgartner up in a lightweight ultra-thin 55 story helium balloon which would carry him to the stratosphere for the jump.  The 23-mile jump would allow Baumgartner to cross the sound barrier, a first for a sky diver.

When the team went to launch the balloon this morning, the winds were 20mph 700 feet up, while the balloon is only safe in winds up to 3mph. The team is planning to have another go at the jump tomorrow.

Among the risks Baumgartner risks is a potential rip in the balloon during the three hour ride up to the height of his jump. Once up in the stratosphere Baumgartner will jump from a pressurized capsule into a near vacuum. Baumgartner will be wearing a pressurized suit to endure the fall which will be the fastest and farthest attempt in human history. Risks from the jump are a potential tear in the jumpsuit during exit and possibly spinning out of control at high speeds.

You can keep up with the event at http://www.redbullstratos.com/live.