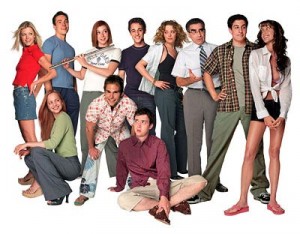 The madness continues! The Los Angeles Times is reporting that Universal is planning on rebooting the teen comedy franchise. There is talks of the original cast being in talks to reprise some of their roles. So, I don’t know exactly how this reboot will take place. Will it start us with a new generation? Will it act like none of the straight to DVD sequels never happened? Will Eugene Levy find better ways to spend his time?

The last theatrical film in the series was 2003’s American Wedding which seemed to only have half of the cast back. After that an obscene amount of American Pie Presents titles made their way to DVD. Most of these films featured Eugene Levy in it and, some off screen relation in the original movies to the original cast. The Stiflers were all well represented, but unfortunately comedy was not.

This continues the trend of Hollywood in the process of rebooting anything that was even slightly popular at one time. It seems lazy and ill advised, but apparently they realize they can make a quick dollar off of an already well promoted brand. I think things like comic book series can be much more easily rebooted than a comedy franchise like American Pie. Comic book movies you fall in love with an archetype of a character which can be played by many different people. A comedy franchise you have to find someone who has their own brand of comedy, and you can’t go with an established origin story.

Should we start a petition to telling Hollywood to stop going overboard with the reboot ideas?