The St. Louis Rams in an effort to raise awareness to the environment have labeled this week “Green Week”. Some of the activities include demonstrations across from the dome on how to decrease your carbon footprint, give aways and they have opened a Fan Experience.

Quick Hit! is a FREE, yes I said FREE,store where Ram fans can go and do some fun and interactive things all relating to football. I was the first person to check it out today and can fill you in on all the goings on there. They have photo opportunities to get you picture taken in a cut out of Steven Jackson or just in front of a Rams back drop, they will measure your vertical leap just like you were a rookie at the NFL combine! They also have a football toss game where you are throwing the ball to Danny Amendola (no just a poster) and each day the winner will receive an autographed mini helmet! They have lots of other raffles during the weekend including signed footballs and posters from all your favorite Rams players, including SAM BRADFORD!

There is also some really cool Rams memorabilia on display there including Issac Bruce’s first Ram uniform he ever wore back in the LA days. They also have the NFC championship ring from 2001 and Superbowl trophy and ring from 1999. They also have highlights running on TV screens and a PS3 set up for kids to play Madden 11!

While no players will be making visits (we have a game to prepare for) they cheerleaders and kid fave Rampage will be there taking pics and signing autographs. Ram Man will be back Saturday morning around noon to meet with fans and take pics also. QUICK HIT! is just that, it is only here this weekend today through Saturday 11-7pm and everything in there is FREE! Bring an old t-shirt and the folks at QUICK HIT will “recycle it” by putting a RAMS screen-print on it for you! 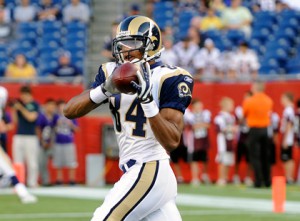 News from Ram’s Park, Mizzou standout wide-receiver Danario Alexander is moved to the active roster now that Mark Clayton has been put on injured reserve. Alexander will provide sure hands, speed and a giant vertical leap that this receiving corp is in desperate need of. This Sunday versus the Chargers, if Alexander is suited up look for him to be a regular on Special teams and possibly some goal line plays.

Game day is Sunday at noon!

I am Ram Man and i will see you at Quick Hit!, Broadway and Cole and always in the End-Zone!