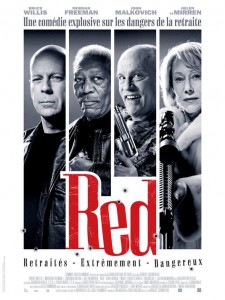 Red makes DC Comics two for three this year at making fun action pictures come alive from their pages and neither of them included a character anywhere near being their A, or even B, tent pole characters.

R.E.D.’s, Retired Extremely Dangerous, are ex-CIA operatives that are no longer operating in the field but are still dealt with extreme caution as they were the best of the best in their time.  Frank Moses is definitely a R.E.D. and as he wrestles with retirement the only connection he has to anyone seems to be his pension agent, Sarah.  Frank has developed a thing for her though and he is tearing up his checks and reporting them lost for the opportunity of talking to her over and over again.  It’s when an attempt to take out Frank puts himself and his hopeful lady friend into danger that our story really kicks in.

Following a get the gang back together formula, with a blindly pursuing “bad guy” to boot, the film at once feels familiar and fresh due to its older participants in the cast.  Seeing these guys kick ass left and right is all together fitting and funny and you never once doubt what the R.E.D.’s are pulling off.  The action beats do not disappoint as Robert Schwentke keeps things light and thrilling with action scenes in which we can both clearly tell what is going on and are inventive as well (sadly something we don’t get enough of in action films nowadays).  The action and scenarios a bit over the top but remain grounded enough in reality that we believe these retired folk are laying waste to the CIA’s best.  The film is also just as successful as a comedy as it is an action film and will have you laughing for the length of its runtime.

I do have a couple complaints about the film but nothing that really hampers things as a whole.  You can really tell that the film has a shorter budget as the look of the film is nothing spectacular.  The effects and action look good but the film just seems to be taking shortcuts whenever possible.  Some odd transitions and jumps in narrative are also to convenient for the story as characters are all of a sudden out of dangerous situations without showing their escape.  The film’s acting also seems a bit too tongue in cheek at times but everyone is having so much fun it isn’t really worth worrying about.

The best part of the feature is getting to watch this talented older cast command the screen and action that they have to handle.  Bruce Willis stars in the lead as Moses and gives us classic Bruce, if a bit more quietly reserved, but there is no doubting his action chops.  Willis still looks great with a gun and more than capable of going toe to toe with Karl Urban in a pretty great fist fight in the film.  John Malkovich is the stand out in the picture and there just isn’t enough of him here.  Everything he says is gold and playing the crazy burnt out spook, Malkovich, is never once not believable in his could possibly kill anyone at anytime mentality.  Helen Mirren is wonderful to watch as always and seeing her handle heavy artillery is a think of comedic beauty.  It is also great to see Brian Cox back on the screen again, he used to be everywhere, and he is wonderfully playful as a Russian that gets thrown into the mix.  Morgan Freeman, Mary-Louise Parker, and Karl Urban are also all quite good in their parts with Parker getting some good laughs in as the sneaky co-lead of the film.  Oh, also, the more Richard Dreyfus the better.

In the end, Red is a very good action comedy that will please viewers both young and old.  The cast appeals older and the action is good enough for anyone.  Add in a pretty funny script and some solid performances from an A list line up of stars and there is a lot to like about Red.  If the film was a bit grander, a bit more original, had a bigger budget, and didn’t take as many convenient short cuts in story it could have been a truly great movie.  As it stands it is a still a ton of fun and is a definite crowd pleaser that is well worth your dime.