RAMS GET “MOWWED DOWN” IN MOTOWN!

The Rams rolled in to Motown on a two game winning streak and owning a share of the top spot in the NFC West. All that disappeared 14 seconds into the second qu 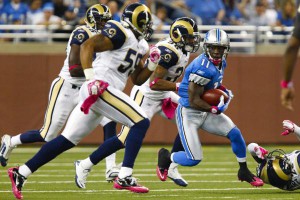 arter as Stefan Logan returned Josh Browns kickoff 105 yards for a Detroit touchdown! This pu the Rams down 10-3, a deficit from which they could not recover. My problem is that we  came into a game against an 0-4 Lions team that was desperate for a win and we gave them the ball on our side of mid-field to start the game. NEVER START A GAME WITH AN ONSIDE KICK! Yes our defense was able to just hold them to a field goal, but it showed our teams attitude that would carry on the rest of the game. 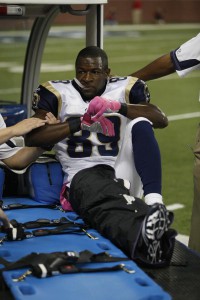 This picture says it all.

Mark Clayton went down with a season ending knee injury in the first half which left the Rams on Danny Amendola to catch the ball. No, there were other receivers suited up, they just dropped every ball thrown their way! Soon the Lions double covered Danny and Bradford became a victim of the Lions pass rush.

WE NEED A WIDE RECEIVER! No I am not saying that we need to trade our 2011 draft to the Chargers for Vincent Jackson, but there has to be someone out there on a practice squad that we can pick up before Bradford gets sacked to death! 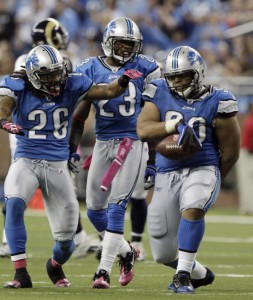 Sunday was also the first time the first and second overall picks in the 2010 NFL draft got to go head to head. Ndamukong Suh came away the winner in this match up with a couple tackles and a interception of Sam Bradford. It seemed to me watching it on a 65″ HDTV that the Lions knew the snap count as they were getting through the O-line the same time the ball did. SUGGESTION: Block or maybe change up the snap count! 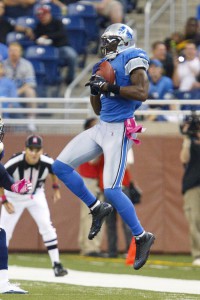 We were half way through the second quarter of the game trailing 10-3, and the Lions still hadn’t used their best weapon on offense, Calvin Johnson. Woops, they heard me. The next 13 play 7 minute drive ended with a touchdown pass to the giant (he looked like a giant next to our def. backs)  receiver Calvin Johnson in the corner of the end-zone.  Lions 17-3.

The Rams were able to tack on another field goal and thought they would go in and regroup at halftime trailing by 11, 17-6. The Lions had a different idea. Shaun Hill, who looks like an adult version of Jerry Mathers a.k.a. the beaver, played more Joe Montana marching the Lions the length of the field in a 1:27 for another touchdown before the half way point in the game. 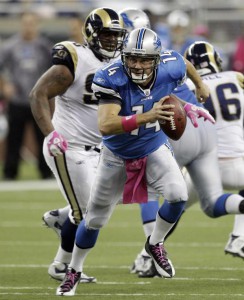 The second half of the game was a blur of silver and sky blue as the Detroit Lions smelled the sweet taste of victory for the first time this season. The Rams failed to do anything to close out the game. Bradford had his worst game of the season 23/45 for 215 yards and two interceptions (one returned for a touchdown). The Rams top ten defense failed to make the trip north this week. The Lions stars had career days against us this week: Shaun Hill was 21/32 for 227 yrds and 3 touchdowns, Jahved Best (rookie RB from CAL) had a combined 100 yards rushing and receiving, and Nate Burleson had a 29 yard touchdown grab to add to his 4 catch 56 yard day. 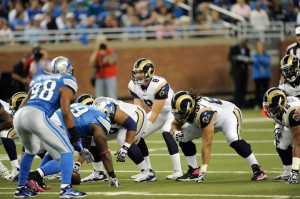 As I said Bradford had one touchdown pass, to Alphonso Smith of the Lions! The only bright spot, if you look past his fumble in the red zone, was Danny Amendola who was able to catch 12 balls for 95 yards. Steven Jackson also was able to rack up 114 yards on the ground, but neither was able to take it to the house and help the Rams score.

The silver lining, we play in the NFC west! Yes the Seahags were on a bye this week and look at another loss as they fly into Chicago this week. The Forty-winers are still winless at 0-5 after dropping another close on to the Eagles this week. The Arizona cardinals were able to beat the Superbowl Champion New Orleans Saints in the desert this week with rookie QB Max Hall from BYU. So the Rams are still in second place in the NFC west just one game out after the 44-6 loss to the Lions.

This Sunday the road weary San Diego Chargers limp into town after getting a loss in the black hole of Oakland ending a 13 game winning streak against the Raiders. Both team sit at 2-3 and need to win! Should be a battle. I will keep an eye on the transaction wire to see if the Rams listen and get us someone to catch the ball.

I am Ram Man, fan forever and as always will be in the end-zone this Sunday to see a win vs. the bolts!